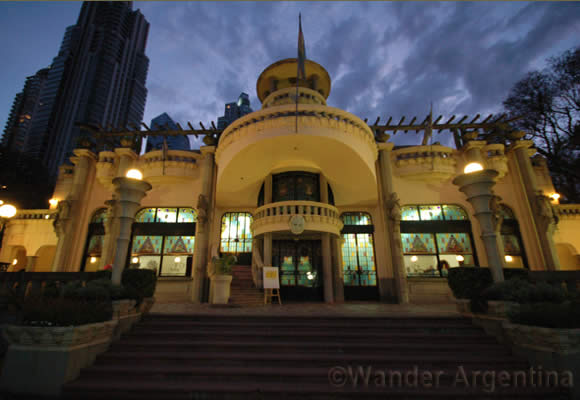 Puerto Madero’s Humor Museum (MUHU) celebrates everything to do with Argentine humor with exhibitions featuring graphic and political art, comic strips and animation, shown in their small cinema.

The permanent collection spans almost two centuries of Argentine humor beginning with a 1834 lithograph series by César Hipólito Bacle, ‘Costumes and Customs of Buenos Ayres,’ satirizing Porteño high-fashion of the time. Publications that relied heavily on humorous political cartoons blossomed in the later half of 19th century Buenos Aires.

Comedic illustrations from magazines during the administrations of Bartolomé Mitre and Domingo Faustino Sarmiento provide unusual insight into political opinions of upper-class Argentines at the time. Some of the most shocking illustrations show savages ‘barbecuing’ women and depict Afro-Argentines (before the population declined) as monkeys.

As literacy rose in the early 20th century, the modern weekly magazine flourished, the most famous being Caras y Caretas (Faces and Masks), Argentina’s answer to the New Yorker, published between 1898 and 1941.

The mid-20th century is considered ‘the golden age of national caricature’ according to MUHU. A particularly Porteño and sardonic sense of humor emerged with publications such as ‘Rico Tipo,‘ portraying stereotypical characters from Buenos Aires neighborhoods including ‘the marriageable girl,’ ‘the football fan,’ ‘the tanguero,‘ and Abel Ianiro’s character called ‘Purapinta‘ (Just for Show), a strapping man who proves useless in every situation.

In the later part of the 20th century, as the military came to power, Argentine humor became more naive and absurd.

Among the most recognizable comic strips is Quino’s (Joaquín Salvador Lavado) Malfada, about a rebellious little girl, which was published around the world in 30 languages.

MUHU’s main temporary exhibit in 2014 was a retrospective of Quino’s work to celebrate the 50th anniversary of Argentina’s most iconic comic strip. Visitors can get a shot with Malfalda nearby at Defensa and Chile streets, where a statue of the comic character makes up a stop on the Comic Strip Walk.

The Golden Years of the Münich Beer House

The Humor Museum is worth visiting as much for the building and its history as for the activity inside.

The museum is housed in the old Cervecería Munich, or Münich Beer House, dating to 1927.

Constructed during the peak of German immigration to Buenos Aires, it was designed by Hungarian architect Andrés Kálnay, noted for designing some of the city’s other institutions, primarily, Luna Park stadium.

Amazingly — considering the construction methods available at the time — the detailed building was completed in four months. Aside from being considered an architectural triumph, the brewery was equipped to handle thirsty crowds, with a complex system of beer lines and the largest refrigeration unit in any business of Buenos Aires at the time.

The eclectic Bavarian-style building incorporates Art Deco influences and design touches that celebrate Munich folklore and the world of beer. 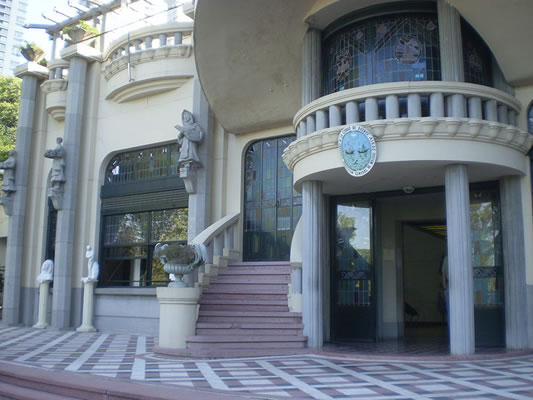 Along the terrace walls there are stencils illustrating scenes of Oktoberfest, farmers, jokers and stout, German couples surrounded by beer barrels and horses. In the garden you can also view the fountains of Neptune and Naiades, created in the mid-1860’s, complimenting the nearby Water Nymphs’ Fountain near the entrance to the Ecological Reserve.

From its 1927 debut, the brewery was a popular gathering place among the Buenos Aires’ elite, particularly on a summer days and remained so during the next three decades.

In the daytime this was a popular spot thanks in part to its location near the Balneario Municipal Sur, a beachfront constructed nine years earlier on the banks of the River Plate, which was still clean enough to swim in at the time.

At night visitors would come to drink what was then considered a highly nutritious drink – strong, dark, German-style beer. Immigrants and hipsters of the day would gather to dance the waltz and hear the live music of musicians collectively known as the ‘The Artists of the Balneario.’

Buenos Aires’ narrative even has it that the perpetual man on the town, tango great, Carlos Gardel  once gave an impromptu performance at the brewery.

With the stark decline of the Costanera Sur through the years — before Puerto Madero’s revitalization in the 90’s — the Münich beer house finally closed in the 1970’s.

Some of the decorative statues seen around the museum today were resurrected from the muddy banks nearby where they laid like neglected tombs of Buenos Aires’ splendorous past.

With the new development in the area in the 1990’s, restoration of the beer house began. Telecommunication company, Entel briefly occupied the building before it was transformed into the Museum Center of Buenos Aires in 2002, and in 2012, the Humor Museum of Buenos Aires.

Guided afternoon tours are available in Spanish, English, Portuguese and Italian and can be arranged by calling the number below.