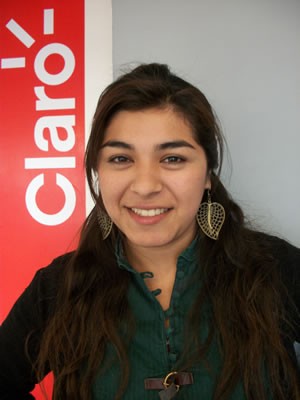 I’d like to design community housing and plazas. I want to travel to the interior of the country and build neighborhood housing that people can pay off bit by bit.

Really I chose architecture because there is a need for architects in the interior of the country. But I really love dance, mostly folk dance.

• What is your favorite dance?

• What do you think of neighborhoods such as Puerto Madero which kind of defines the current trend in urban housing?

I like the warehouses along the levee in Puerto Madero. The skyscrapers take up too much room though. I’m not a big fan of skyscrapers. More than anything it’s hotels down there and how does it serve everyday people if we can’t afford to live there?

• What is your favorite neighborhood in Buenos Aires?

Villa Fiorito, where (Diego) Maradona is from. My aunt who lives in Spain went to school with Maradona there.

• What do you want to do when you graduate university?

I want to live in Santiago del Estero. My mom is from Tucumán and my dad is from Santiago del Estero. Folk dance is much more common there. I lived there as a kid, that’s how I started dancing. The city has programs set up to teach it so that the kids aren’t in the street all day. They purchase the costumes and there are competitions and events where the kids dance all the time.

• After living in Buenos Aires don’t you think you’ll get bored in a small town like Santiago del Estero?

Maybe, it is a lot quieter. But you have more contact with nature and with people. You can walk around at two in the morning and you don’t need to worry about a thing. It’s a different upbringing — the kids are different than the kids in Buenos Aires.

• How did you end up working at the Claro call center?

Actually, a telemarketer from here called my house and my dad signed up for the card and asked if they had any jobs. They said yes, so I came by and presented my curriculum and got the job.

• What do your parents do?

There are artisans — they make rugs and clothing. That’s my other job —I sell the items they make in bulk in La Boca, San Telmo, to stores on La Valle and to people with stands at the Puerto de Frutos in Tigre.

• So you have two jobs, study, and living in the province must have a bit of travel time everyday?

Yes, it takes an hour to get here and usually an hour and a half everyday to get home. I don’t know why it takes longer to get home.

• So what are you actually selling on the phone?

We sell a cellular phone plan that comes with a credit card.

• Where do you guys get the phone numbers you call, do you buy them?

No, we pick them out from the telephone book.

• What kind of response do you get when you bug people at home after they’ve had a long day’s work?

We get a bit of everything! Twenty percent are rude and they say; ‘dejarte de joder!’ or they just hang up on you. About 20% say they already have a card and about 60% of the people are interested and want to sign up for the plan.

• You mean to say that 60% of the people you call actually sign up for the plan? That seems like a lot. Isn’t telemarketing usually a numbers game?

• So does everyone who wants the card receive it then?

Not people in the red. If they are interested we then run them through a computer to check if they currently have debt. We can’t sign them up if they do.

• Do you ever feel bad knowing that you are giving out high-interest credit to people who may have a hard time paying it off later on?

Yes, I feel bad for the old folks. In fact, sometimes they are interested, I turn them down. I tell the computer system is down or that they don’t qualify, but it’s not true.

The thing we say that it cost AR $230 to maintain the card but there is insurance and other costs which add up. I personally don’t like credit cards because in the end you end up paying much more in interest.

• What is the craziest thing someone has told you when you cold called them?

Something I didn’t like, I was on the phone with a grandpa and I hear someone in the background yelling, ‘Get off the phone son of a bitch! Get off the phone or I’m going to kick your ass!’ I said, ‘Sir who is that yelling at you like that?’ and he says, ‘Oh that’s my granddaughter.’ I said, ‘It sounds like someone needs a good spanking.’ And he agreed with me, he said, ‘Yes, various spankings.’”

She was maybe 16 or 17. My parents are from the country, so I’m not used to hearing kids speak to the elderly like that.

• Do you have brothers and sisters?

Yes I’m one of five and I’m my dad’s favorite!

• You have a brother who lives in Seville, Spain whom you visited. What was your impression of Spain?

What I liked is it was very clean. They have people sweeping the streets all the time. In Argentina we’re pigs! Even myself —sometime I throw something on the ground because it’s just easier than looking for a trashcan. Argentines are very lazy. The image of the Argentine is someone lounging on the sofa eating pizza with the remote control in hand.

• So you said you used Claro for a cell phone service even before you worked here. Taking into account that you might be biased since you for them now, what is your opinion of the three cellular companies in Argentina?

I like Claro because it’s the cheapest. Moviestar, I don’t like at all, I didn’t have a good experience with them. I don’t even want to talk about it. Personal is very expensive. I mean they give you weird deals like AR$15 towards text messages within five days, but it’s more like a gimmick designed for kids who send a lot of text messages.