Diego Maradona was one of the best footballers of all time, but his tumultuous, partying lifestyle meant the scandalous events of his life often put him in the headlines all over the world. Not only was his known for the dodgy ‘Hand of God’ play in the World Cup finals with the English but also for doing drugs, having multiple partners and illegitimate kids as well as links to the mafia and fighting with the paparazzi.

Diego Maradona’s life, like others who fought their way out of extreme poverty to stand with the world at their feet, had a life that followed a story arc that included many profound lows to go along with the highs.

“Everything about Maradona is exaggerated — the good and the bad. As a player he was number one. He can be charming, but in his private life he broke all the rules.”

During his career, he certainly found himself in trouble with the authorities often enough.

From the time he arrived in Europe to play with Barcelona, his cockiness and refusal to back down from a fight saw him clash with the club’s management.

It was at this time that Diego began to take cocaine on a regular basis, although the problem would become more apparent later.

His tenure at the club ended in disgrace after Barcelona lost the 1983-4 Copa de Rey Final.

After the full-time whistle he was the main protagonist in an all-in brawl with almost the entire Bilboa team. In footage of the incident, he can be seen launching fly kicks into numerous opposition players like a miniature martial arts expert in a 70’s kung-fu movie, afro and all.

Maradona received a lengthy ban for his violent performance, and decided he would rather quit Spanish football than serve out his suspension, thus facilitating his surprise move to Napoli.

At the Italian club, Maradona found that though he was a god on the pitch, in real life he remained a man. His marriage to his childhood sweetheart, Claudia Villafane (whom he would later divorce) was starting to turn sour and his cocaine addiction began to get out of hand, earning rebukes from club directors.

Rumors of close ties to the Neapolitan mafia, The Camorra, followed him, and he also found time to father an illegitimate son, Diego Jr., whom he later admitted — with much insistence — to being his own. Paternity payouts and tax evasion in Italy from those days hung over him for decades after.

Towards the end of his time at Napoli, Maradona’s performance suffered due to his drug problems, and weight gain. Eventually, in 1991, he was busted in a drug test, and received a 15-month ban, ending his days in the Italian league.

He would never return to complete his contract with Napoli, but he did continue playing, albeit with a little less magic than before.

He was still good enough to make the Argentinian team for the 1994 World Cup, despite being found guilty of firing an air rifle at journalists outside his home in the meantime. That tournament would prove to be his last at an international level, however, as he was again caught for doping, testing positive to ephedrine and promptly kicked out of the World Cup.

After scoring a superb goal in a game against Greece in the first round, he famously celebrated by running towards a TV camera screaming with elation, eyes bulging out of his head. The image has become an iconic one in Argentina, and serves as a reminder to many there about how many times Maradona, despite being the people’s hero, has also frequently disappointed a great many of his fans.

Argentina failed to recover from the loss of their star, and were soon bundled out of the tournament.

⇐ continued from: Maradona: Goal of the Century

⇐ continued from: Diego Maradona: The Man, the Myth 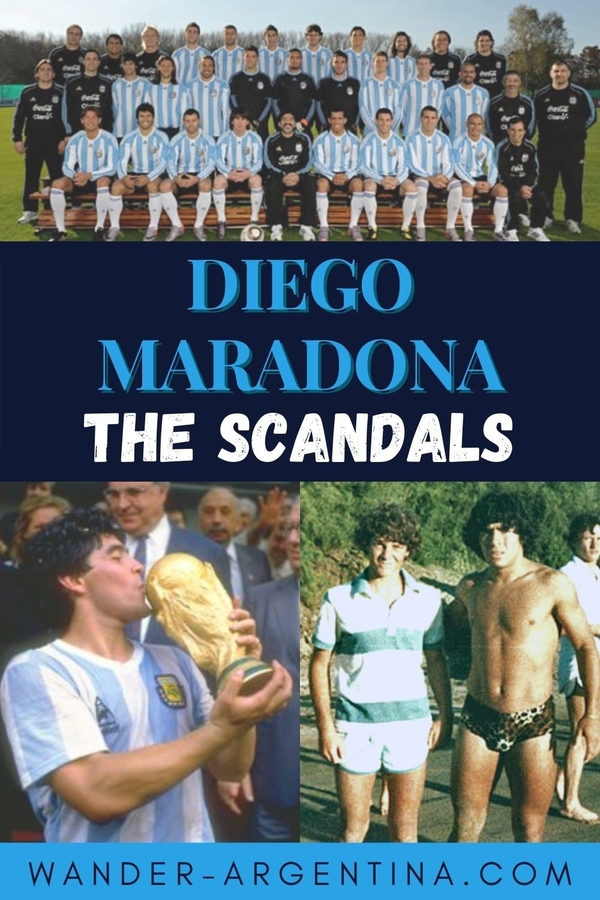