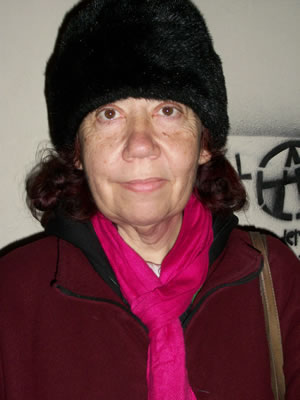 Editor’s Update: We ran into Genoveva outside the Palermo shopping mall. She now has housing and is doing well.

Q: You sell Hecho, the magazine that gives the homeless a chance to make some money, where do you sell and what’s that like?

I usually sell it in the Peru stop of the Line A subway line. It’s difficult; everything is difficult. People don’t have money or there are people who have money who should have more solidarity. I have to be very polite, and what I get isn’t much. I have to be very diplomatic; “Sir, would you please buy an Hecho in B.A. from me?” and even then, sometimes I may not make enough to eat. Luckily there are people like these guys from El Gran Parilla that give out noodles to eat every night.

• Where do you lay your head at night?

I have a little spot — it’s kind of an Anne Frank type of situation. If they find me the may say, ‘Oh you can’t sleep here,’ but maybe they have a dog they treat better than me.

• You’re a poet. How far did you go in your education?

Yes, some of my poems have appeared in Hecho in the ‘Poems From the Street’ section. I have a four-year degree in Arts and Literature from the University of Salvador.

• How did you end up on the street?

I lived with my mom in a hotel in Constitución. Once she was gone I didn’t have anywhere to live. That was quite a long time ago.

• There are indigent people who do get housing, you don’t see that many women on the street compared to may other cities in the world. Have you investigated the services provided by government?

Yes, I’m doing the paperwork now to get a room in a boarding house. In the meantime I would like to find a room to rent for AR$100-200 a month. We know what another option is for women on the street, but I wouldn’t do that. I want decent work.

• What type of attitude do you feel people have toward the homeless in Buenos Aires?

They may figure; ‘Oh she’s in this position because she’s an alcoholic or takes drugs,’ but that’s not the case with me, I’m a normal person.

Here they don’t give people the credit they deserve, they laugh a lot, joke a lot without figuring out what the situation really is. It’s not that people are bad but it’s like they turn on the television and watch soccer and they never really get to the heart of what is important.

There’s a lot of people in the street and the government just washes its hands.

• Some people in the street drink or take drugs to cope with the situation. Do you get depressed?

• You’re sitting in front of this building and it seems like the residents are okay about that, they say hello. The people don’t give you problems?

Yes, people say hello, people generally like me. I’m relatively well dressed, I’m not drunk, I’m not violent, they realize I’m okay. The only place I did get kicked out of once was McDonalds because I didn’t buy anything.

• What kind of work would you like to find?

I could work in administration, as a receptionist, answering phones. I’m very organized. Or maybe I could accompany an older person who lives alone.

• You say you have a degree and you don’t have any substance abuse problems, that is not a typical profile for a homeless person. What is the main factor that caused you to end up in the street?

Well I never married and there is a luck factor. Maradona came out of the slums but he did that playing sports. What’s woman to do? She has to find a guy that will support her. We have a woman president but that’s because her husband put her there. She doesn’t do anything for women. Here the power is in the hands of men.

This country exports food. The land has sufficient resources, but they are not well distributed.

• What would you like people to know about you?

Anne Frank had a big success, but when? After she died! Be billionaires, be rich inside by being generous. I don’t need much help, just a little here and there, that in sum allows me to get by.

Education is very important because money comes and goes but education lasts forever.

Perhaps a caress,
the touch of your hands
your patience
I don’t invalidate
the love
I don’t perceive it