The six principal lines of the Buenos Aires subway each have a unique vibe, much like the 38 neighborhoods of the city. 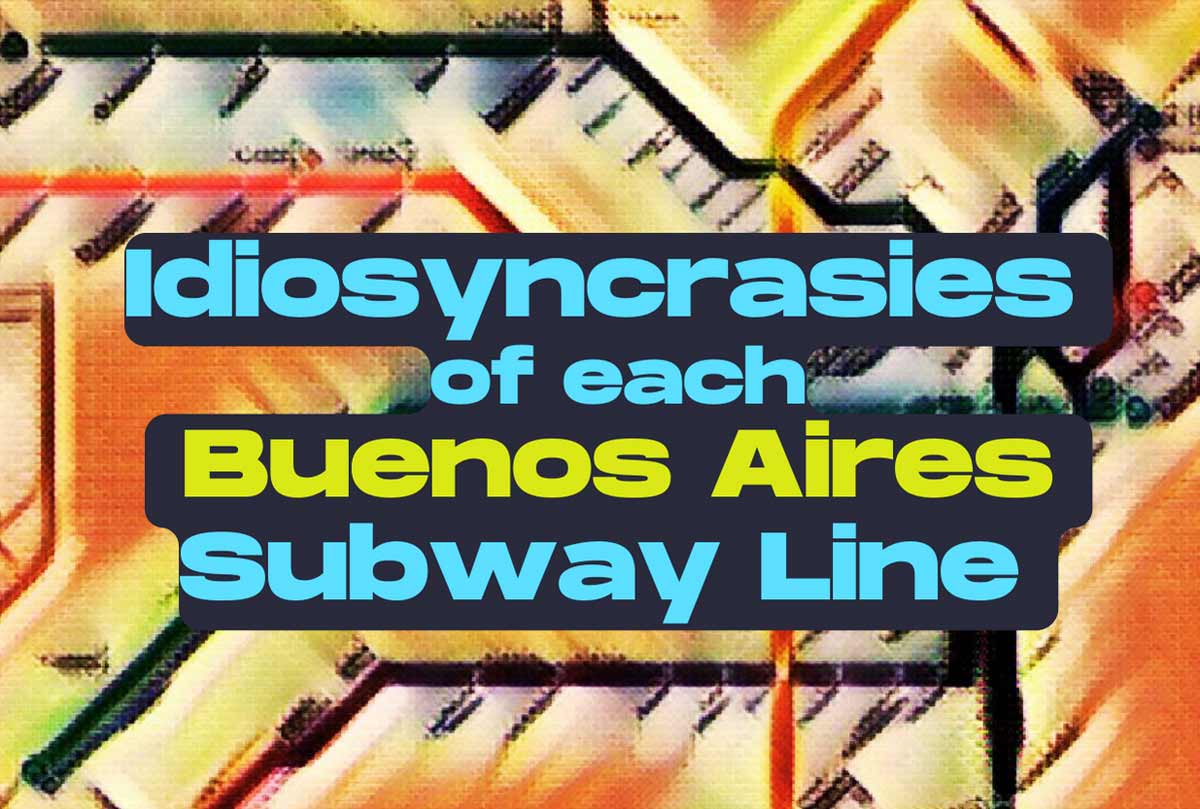 From the A to the H — every line has a particular history, distinctive appearance, and is frequented by those of a particular social stratum.

The A Line (light blue)

It used to be that on the historic Línea A, visitors got to experience well-made Belgian carriages, flickering lights, saloon-like booths and hand-operated doors, highlighting the splendor of Buenos Aires’ golden age.

Inaugurated in 1913, the A line is the oldest in the network and was the first subway line to be built in Latin America, the Southern hemisphere and the Spanish-speaking world.

To the dismay of many, in early 2013 the city announced it would be doing away with the old cars and replacing them with modern carriages made in China.

Each station on this line is cleverly color-coded by the bright tiles on its walls, initially intended to guide those who could not read.

Line A: Stops of interest

The A line, like the D and E lines, branches out from the Plaza de Mayo – the most important square in Buenos Aires.

Among other sights, ogle at the pinkness of the presidential palace, the Casa Rosada and spot the madres (mothers) of the Plaza de Mayo, who still march round the plaza’s mini-obelisk on Thursdays, demanding to know the whereabouts of their children who were ‘disappeared’ during the military dictatorship of 1976-1983.

Argentina’s most important political events took place in this square and still do today.

Other notable stops along the A line are the Congress building at Congreso stop.

The line also goes under historically important streets Avenida de Mayo and Avenida Rivadavia along which are Café Tortoni and Las Violetas.

The tasty treats and grand buildings of these famous cafes are almost obligatory for visitors.

If C is a working class line and the D line is for the upper echelon, the B line is definitely in the middle.

It is more down-to-earth than the D, yet not as grimy as the C.

A mix of student and workers frequent the faded red seats of this line and the culture hungry will find plenty to satisfy along the way.

La Línea B starts close to the port and central post office and heads out from the center to Parque Chas, Las Incas.

Line B: Stops of Interest

At one end of the line, N. L. Alem, in microcentro. This is the stop closest to Puerto Madero, Buenos Aires’s port and most modern development, full of fancy bars, restaurants and a floating casino.

Behind this area there is the Costanera Sur, perfect for a Sunday stroll and a bite from one its many barbecue stands.

For a moment of calm within the city’s boundaries, visit the city’s ecological reserve.

N.L. Alem stop is also next to the stadium Luna Park, which holds boxing, music, and other events throughout the year.

The second stop is at the pedestrian thoroughfare of Florida street, by downtown’s shopping mall, Galería Pacíficos.

The line then goes along main avenue, Corrientes, past the city’s most famous pizzerias, the center’s theater district, through wholesaler’s craziness at Pasteur stop in Once and up towards Abasto neighborhood.

Carlos Gardel station in Abasto was renamed to pay homage to the tango legend who lived here.

Get off for a spot of shopping or cinema at the splendid Abasto shopping mall, formerly an old fruit market, for the popular La Bomba de Tiempo evening on Monday nights at the Konex Cultural Center, or for the Carlos Gardel museum nearby.

Also worth a visit, and slightly further off the tourist trail, are the weekend fair and Natural Science Museum at Parque Centenario – Angel Gallardo stop and Chacarita cemetery and organic food market El Galpon at Federico Lacroze station.

The line continues heading towards the last stop in Parque Chas, Las Incas, which has 16 pre-Colombia inspired murals in its station.

Travel on the C line and you get a roller-coaster ride thrown in for free.

Expect to be hurtled into fellow passengers as macho train drivers lunge round hair-raising bends, slamming on the brakes at stations as the smell of burnt rubber fills the air.

The C is very much a train for the workers, it goes between main railway transport hubs of Retiro and Constitución (both which are beautiful train stations that receive lots of daily traffic, with train lines extending into the province of Buenos Aires).

It connects with all the lines except the H and carries thousands of commuters in and out of the city.

According to the SBASE, the official site for the subways of Buenos Aires, the C line is often called the subte de los españoles – the Spanish subway.

This is reflected in the Spanish inspired artwork at stations General San Martin, Diagonal Norte and San Juan.

Most tourists will at some point go to end of the line to Retiro, home to the city’s main bus and train stations.

From here, take the bus to other destinations in Argentina, the train to easy day trip destinations like San Isidro or Tigre or the shuttle service Manuel Tienda Leon to the airport.

At the other end of the line, lies Constitución, subway stop, train station and neighborhood.

The magnificent train station, built in 1887, is the largest in Argentina — over one million people travel through it every day.

From here, take the train to other cities such as La Plata, Mar Del Plata or Bahía Blanca.

The surrounding area has a bad reputation, and the streets around Constitución station are best avoided, especially at night.

Other attractions along the line include General San Martin stop, close to main shopping street Florida, and home to Plaza San Martin and the impressive Palacio Paz and Palacio San Martin. 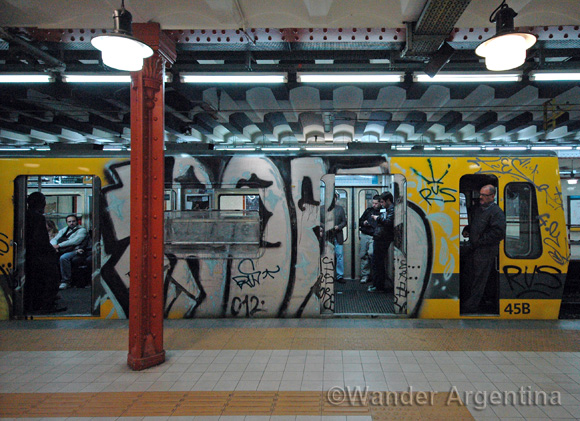 For a smoother ride, hit the more up-market D line, the longest and busiest line in the city.

Expect to see students, especially near Facultad de Medicina stop, the University of Buenos Aires’ medical department, lawyers on their way to court, close to Tribunales station and well-dressed Recoletans recovering from plastic surgery around Agüero and Bulnes stops.

A useful line for tourists, the D starts in Plaza de Mayo, and goes past the Teatro Colón and the grand judicial courts at Tribunales station.

Other highlights along the way include shopping at popular Alto Palermo mall at Bulnes, the Buenos Aires Zoo (now ‘Ecopark’).

The line also goes by La Rural convention center and Palermo parks at Plaza Italia, chic bars and cafes at Palermo stop, and Belgrano’s Barrio Chino and museums at Juramento.

Towards the end of the line nearest Congreso de Tucumán, the last four stations are officially estaciones culturales (cultural stations) with exhibits and artwork in the station halls.

The E line is somewhat unremarkable compared to the other lines.

The line runs a little less frequently than more trafficked lines and has somewhat dingy lighting but it’s also not usually packed to the gills like the B and C lines.

There aren’t as many performers on this line as the others, but after the C line this is the route where you are most likely to share a ride with a teenager blasting cumbia music from a radio.

One stop that will make it onto the radar of tango aficionados is Boedo, where there are some traditional milongas and Café Margot, run by the same people who run San Telmo’s popular establishments, El Federal and La Poesia.

Those who want to check out the latter two, should get off at Independencia, also a jumping off point to explore the rest of the San Telmo neighborhood and its popular Sunday outdoor street fair.

The artwork on the walls of the E’s stations is also worth a look, each station has murals that tell the story of a period in Argentine history.

The E line has recently been expanded so that it reaches Retiro, with the addition of two new stations in between, called Catalinas and another called Correo Central (where the CCK cultural center is) have given the E line a much needed personality boost.

These new stations connect the E line with the B and C lines as well as the San Martín, Belgrano, and Mitre (which gets visitors to Tigre) railway lines.

The H line is Buenos Aires’ newest line, and it shows.

Inaugurated in 2007, the carriages are modern, the stations sleek, adorned with tango murals, and the escalators usually work. That being said, although it is reliable, it runs less frequently than the other lines.

Its main function is to provide cross connections along the other lines and its usefulness will be greatly improved once planned extensions are finished.

The H currently goes from Parque Patricios until Corrientes and connects across the A, B and E lines.

Stop off at hectic transport and shopping hub Once for a slice of bustling South American market life and cheap, fast fashion on the surrounding streets, or at Corrientes for more mainstream shopping along Avenida Santa Fe.

Time travel and the subway

When constructing the lines B and D, excavators found the remains of extinct pre-historic mammoths, mastodons and glyptodons.

History buffs can see some of these remains at D line’s Juramento station and the B line’s station Tronador, or at the Natural Science Museum in the capital of Buenos Aires province, La Plata – take the train from Estación Constitución.

The contrast between two subte lines is no greater than at Once-Plaza Miserere where the modern H line meets the A line of Argentina’s golden era.

For the full effect, travel through time and change between the two.

Relying on the unsynchronized station clocks alone, you might even arrive at your destination a couple of minutes before you left.

At this point our dear readers may be wondering what happened to line G of the metro?

Line G has been planned since the 1930s, but in Buenos Aires style, it is taking literally 100 years to debate its construction.

The last attempt to get the project going was in 2015, but it’s again on the back burner for now.

→ Check out our affordable Buenos Aires’ City Tour, which gives you a primer on how to use both subway and how to use the buses in Buenos Aires as well as showing you some of the city’s mot important landmarks.