You are here: Home / The Basics / How to Hail a Taxi in Buenos Aires

Hailing a taxi in Buenos Aires is as easy and entertaining as in New York and much less expensive.

Read our tips for how to hail a cab on the busy street’s of the capital, learn what a remis is and find out how to avoid getting shortchanged. 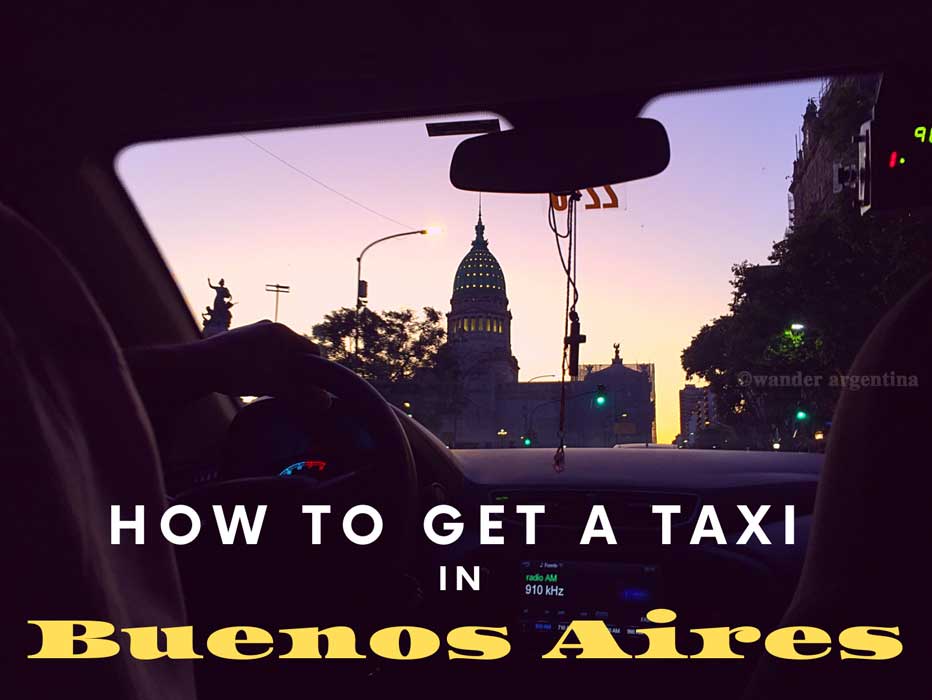 Buenos Aires in particular, with its 40,000 cabs, is one of the best cities in the world to easily get a taxi.

The black and yellow cars abound — there is one car for every 80 inhabitants — and it’s fairly easy to hail one on any major avenue, rain or shine.

The only time it is difficult to get a taxi in central Buenos Aires is when the subway or the bus lines shut down due to protests or flooding and all the wayward passengers decide to hail a cab at the same time.

Buenos Aires How To: Hailing or Calling a Taxi

To summon a taxi on the street, look for cabs that have the red light turned on that says ‘LIBRE‘ in the corner of the windshield.

Make sure you are on the right-hand side of the avenue and try to select a place where the taxi will have room to stop safely — it’s best if you’re not in front of a bus stop.

To be on the safe side, try to hail an ‘official’ taxi, which can be distinguished by the words ‘radio taxi’ on the top of the car and company logos on the front and back doors of the car.

These are taxis that work for a company, instead of independently, meaning if there is any dispute with the driver you can call the company to seek a resolution.

The fact that they work for a company makes them less anonymous and more accountable than ‘freelance cabbies,’ and are thus considered a safer option.

Sometimes people prefer to call a Remis or Radio Taxi on the phone or through an app, because the cabbie’s number and your pick-up address are registered on a computer.

When a radio taxi is called the price is quoted on the phone, but they do tend to be more expensive than cabs that use a meter and calling them in advance is a bit of an inconvenience.

Calling a remis is still common in smaller towns throughout Argentina, but these days instead of calling for a remis in the city some just use an app such as Easy Taxi, Uber, or BA Taxi.

Those traveling with pets will be interested to know that Easy Taxi also has a service called ‘Easy Mascota’ which shows cars that allow pets.

Argentina’s ‘small change’ problem isn’t as dire as it used to be, but before getting into a taxi you’ll want to make sure that you let the driver know if if you only have AR$1000 to pay your fare for a short trip.

Finding change in Buenos Aires is historically a big problem and business owners don’t usually take it upon themselves to go get change at the bank thus a taxi driver may not have change for a 1000 note.

In a blue moon, a shifty driver may take the large note the customer pays with and slyly switch it out with a counterfeit note before telling you he doesn’t have change.

If you only have 500’s or 1000’s on you, make sure you ask the driver if they have change before you get in the cab (bearing in mind that it is unlikely they will want to change a $1000 bill due to Argentina’s currency issues).

Once you get into the cab make sure the taxi driver turns on the meter. If they don’t, request they stop so you can get out and hail another cab.

In Buenos Aires the meter increases every 200 meters or 30 seconds of idle waiting time. 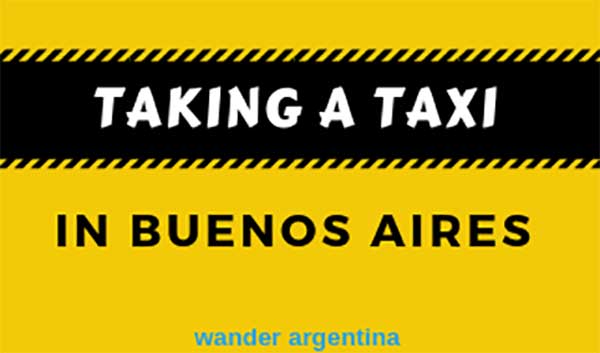 While most of the taxi drivers of Buenos Aires are honest, occasionally a cab driver may take a route that seems illogical or drive you into the middle of a traffic jam.

Part of his act will be to appear incredulous — like he had just no idea that a protest would be blocking the street, even though he’s currently blaring the news on the radio.

The more you know where you are going and how to get there, the less this will happen.

Those who have a data plan for their phone can track the ride on Google Maps.

Feel free to suggest a preferred route to the driver to prevent getting an unintentional ‘city tour.’

Even if you don’t know the exact route, you can at least pretend that you do.

Often the driver will ask you whether you want to take one street or another. He may ask, for example, “Corrientes o Rivadavia?”

Instead of saying that you don’t know, answer with a firm, “Corrientes!” The two routes are likely to be fairly similar in distance so the price won’t change much if you choose the longer option, but at least you will give the impression that you know your way around, and he’s less likely to take you on a ‘gringo tour.‘

The most common way locals give directions to taxi drivers is to name the street and the nearest cross street of their destination, rather than a street number.

It’s often easier to tell the driver, “Vamos hasta Uruguay y Santa Fe” (Let’s go to the corner of Uruguay and Sante Fe Streets), rather than saying, “Uruguay 1245″, for example. Naming the cross streets instead of stating the address also leaves less room for economically-motivated ‘confusion.’

Riders should be aware that there are many one-way streets in Buenos Aires and left turns aren’t usually permitted, so sometimes it is more convenient to just get out and walk half a block near your destination instead of waiting for the cab driver to go around the whole block.

Should you Take a Taxi or Uber?

If your Argentine Spanish is up to par you will probably find Buenos Aires cab drivers to be rather entertaining and opinionated conversationalists — get them going about football or politics for a good laugh, or to learn some new Lunfardo.

The vast majority of taxis in Buenos Aires only take cash, but the newish app rolled out by the city called BA Taxi allows users to request a taxi through their smartphone and pay with a credit card.

Unfortunately, the BA Taxi is app is only available in Spanish and has poor reviews on Google Play and the App Store.

While Uber is on unstable legal ground in Argentina, some foreigners prefer it because the app not only allows credit card payment but it also can be used in English and many other languages. Some prefer to support the taxi drivers in the fight against the apps overtaking their livelihoods.

Getting a Taxi from the Airport to Downtown Buenos Aires

As we detail in our post about airport pickup, Buenos Aires’ international airport Ministro Pistarini International Airport (Ezeiza) is 35k from downtown and there is no train or subway to get to the city. The only public transportation option is the public bus #8, which takes two hours.

To get the shuttle bus you may need to walk 60 meters onto the roadway leading from Ezieza to the same bus stop as the public bus.

It is not recommended to just hail a cab waiting outside the airport (even locals don’t do it) because of Buenos Aires’ infamous taxi ‘mafia’.

One option to get a taxi is the taxi stands, including the auto-service stations with touchscreens, to hire an official taxi.

The taxi stands are on the left-hand side as you come out of the customs area at the airport.

The only drawback to the taxistand option is there is usually a wait for the taxi and they tend to have a surcharge if you pay with a credit card instead of cash. We strongly recommend against changing any significant amount of money at the airport, as they provide the official rate instead of the so called ‘Blue Dolar’, or black market currency rate.

As detailed in our post about ride-sharing apps, Uber doesn’t work at the airport, but the BA Taxi does and allows credit card payment. Make sure to request the taxi ahead of time so that you don’t have to wait.

✈ Alternately, Wander Argentina provides fast, safe airport pickup and we can sometimes provide private money change services, so that our clients can avoid the notoriously high ATM fees or the bad conversion rate at the airport currency exchange.

Do you Tip Taxi Drivers in Buenos Aires?

Tipping cab drivers is not customary in Buenos Aires, although most passengers round up to the nearest convenient amount to avoid fussing with change.

→  Read about ride-hailing apps such as Ba Taxi, Uber and Cabify here.

Taxis in other cities

In other major cities such as Cordoba, Rosario and Mendoza it’s also quite easy to get a taxi as they are abundant and the same rules apply. In smaller towns and areas with less transit, such as the province of Buenos Aires, it is customary to call a remis.

Even though it doesn’t reach the airport, Buenos Aires city has a solid and inexpensive subway system.

→  Learn how to get your Subte smart card and take a Buenos Aires Subway.

→  Read our article on How to Take a Bus in Buenos Aires.

For visitors who want to get outside the city such as to visit San Antonio de Areco or the Atlantic Coast, renting a car is a reasonable option. In most cases all that is required is any country’s drivers license and a credit or debit card.

→  Read our article on Renting a Car and Driving in Argentina 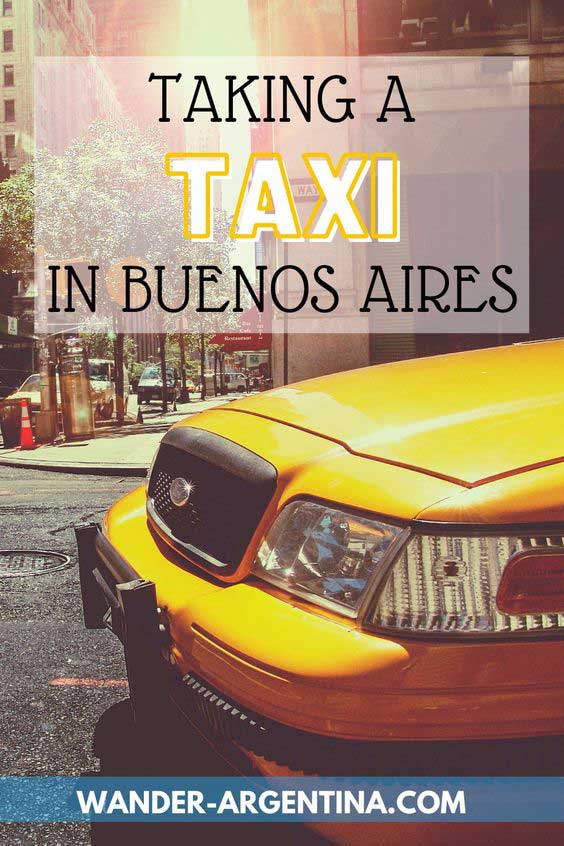