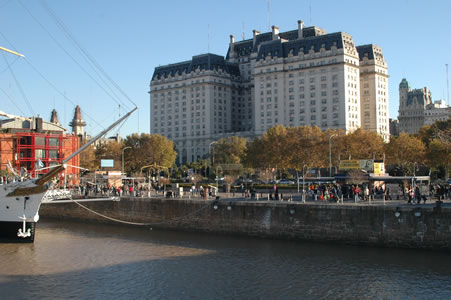 Spanning the limit from La Boca on its south side to Retiro on the north, Puerto Madero is one of the few neighborhoods in Buenos Aires in which to enjoy a glistening waterfront, even if — truth be told — it’s really just a causeway filled with brackish water from the River Plate.

The neighborhood owes its name to Eduardo Madero, a businessman who was contracted in 1882 by the government to construct the levees that would allow large boats to come into Buenos Aires. The city was experiencing a lot of growth at the time but exports were impeded because boats had to anchor far off land due to shallow waters.

Madero’s port solved this problem and was considered an engineering feat that projected an image of Buenos Aires’ modernity. The project lacked foresight though and within ten years of Puerto Madero’s completion in 1898, the size of the boats coming to port increased beyond its capacity, making it obsolete. Puerto Nuevo, a mile north then became the city’s main port and for most the remainder of the 20th century Puerto Madero steadily deteriorated into a wasteland and dumping ground.

After various proposals to resurrect the area throughout the 20th century, it wasn’t until 1989 under President Carlos Menem that an urbanization plan came into place. In a scheme typical of the now unpopular president he created a private corporation — split equally between the federal government and the city of Buenos Aires — to fund the project.

Once incorporated, the land of Puerto Madero was parceled out to private entities. In 1996 it was officially designated as Buenos Aires neighborhood 47 and within the last ten years it has boomed. Today Puerto Madero is Buenos Aires’ wealthiest and fastest growing neighborhood with skyscrapers overtaking the landscape. By 2013 it will have South America’s tallest building, Puerto Madero Towers, a residential project being developed by the same people who own Buenos Aires’ exclusive hotel, the Alvear Palace.

While Puerto Madero residents benefit from the greenery of the Ecological Reserve and the open parks of Costanera Sur, a slight drawback for those living or staying here is it is somewhat disconnected from the rest of the city, lacking in subway service and away from the city’s major arteries. Most denizens here own cars, but other transportation options are making it more accessible.

One of the newest transport alternatives is the Puerto Madero Tramway, hastily inaugurated in 2007, just before the elections. The AR$ 1 train ride won’t get you far yet –- the current two kilometer service runs from the intersection of Independencia to Cordoba Street. Plans are in place to extend the line two kilometers north to Retiro train station, to Caminto in La Boca to the south and — if city officials can come to an agreement — Constitución train station.

A company called Sturla Viajes is now offering a ferry service to get to Puerto Madero from Tigre, at a cost of only AR$ 15 per trip.

A new bicycle path connecting, Palermo, Retiro and La Boca also passes through Puerto Madero. The neighborhood is accessible by foot from downtown or by bus.

1 thought on “The Resurrection and Boom of Puerto Madero”