Historic and elegant, Las Violetas café, patisserie and restaurant is an essential stop on any Buenos Aires café tour. 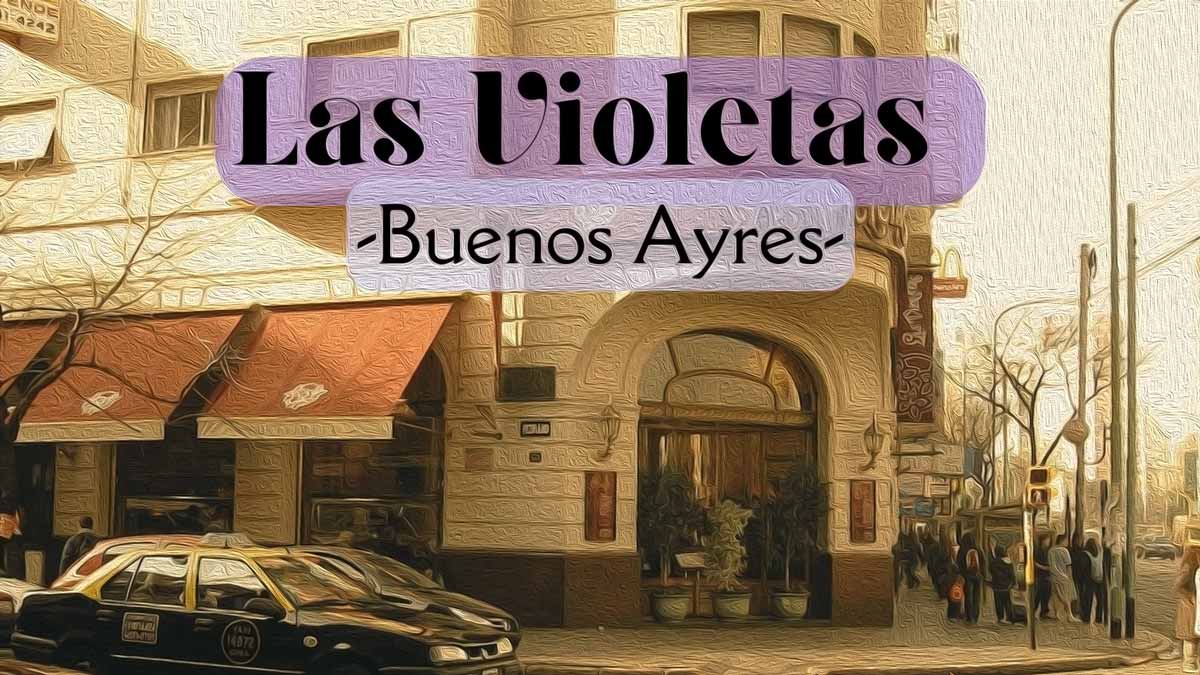 Every weekend afternoon tea-hungry diners form an orderly line outside its curved-glass doors to wait for one of the marble-topped tables.

Declared a Buenos Aires’ Heritage Site in 1998, Confitería Las Violetas is one of those Argentine institutions that refuses to die.

Twice restored, and at one point practically abandoned, its struggles and subsequent revivals are emblematic of Argentine history itself.

The Felman and Rodriguez families founded the illustrious café, with its French stained-glass windows, ornate woodwork and Italian marble columns, in 1844. 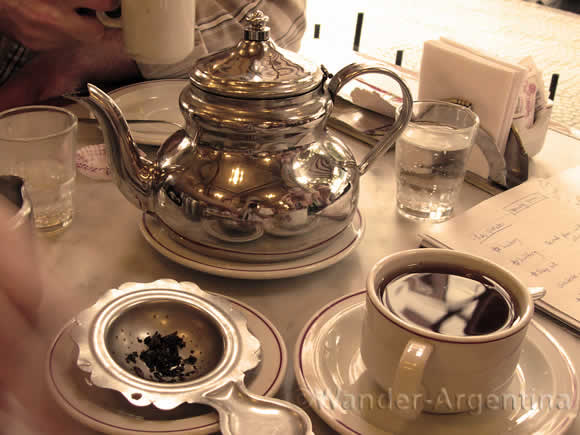 Uruguayan jockey and renowned sweet-tooth, Irineo Leguisamo was a regular at Las Violetas as noted by the cake bearing his name.

A favorite on the menu today, the ‘Leguisamo’s’ mouthwatering ingredients include dulce de leche, meringue and almond cream.

Others had to visit more discreetly.

The abuelas (grandmothers) of the Plaza de Mayo famously held meetings, disguised as birthday parties, at the café in order to plot retrieving their kidnapped or ‘disappeared’ grandchildren.

➡ Read about How to Order Coffee in Buenos Aires

In the late 1990s, Las Violetas was hit hard by a combination of economic factors and was shut down for three years. The building was restored in 2001, and looking grander than ever, reopened that same year.

Bustling yet sophisticated, white-jacketed waiters serve food on silver platters while visitors struggle to choose from a vast array of delicious cakes and pastries.

Aside from their famed sweets, other options include savory snacks, an extensive wine list, cocktails and beer, plus a range of restaurant dishes thrown in for good measure.

Featured are the typical Argentine plates such as a tenderloin steak with mushrooms, grilled chicken, and some fish dishes such as simple hake, salmon with roquefort cheese and a three-colored vegetable pureé, and the ‘Martin Carrera salmon,’ served with shrimp, mushrooms and bacon.

To please the many foreign tourists, Las Violetas also features an American-style breakfast with bacon and eggs.

One classic yet pricey tea-time favorite is the María Callas — a cake, sandwich and pastry platter piled high with tempting goodies accompanied by fresh orange juice and tea, coffee or hot chocolate.

They’re the favorites of María Callas who performed twice in Argentina, including inaugurating the lyrical season at the Teatro Colón in 1949.

A better option for those looking to soak up the Las Violetas ambience without spending a fortune is an aromatic tea or coffee with a medialuna (sweet croissant) or three.

Penny pinchers should note that hot drinks come with a sweet treat, so there’s no need to order separately to sample a bite-sized cream or dulce de leche (sweet milk spread) laden pastry.

Those after a longer-lasting souvenir can step through a separate, yet equally ornate doorway to a crowded shop bursting with pastries, candies and ostentatiously wrapped gifts.

Las Violetas is open around the clock on the weekends and also has a delivery service, but this isn’t recommended for first timers.

The building, complete with colorful stained-glassed windows, Italian marble floors and gossiping grannies is an essential part of the Las Violeta’s charm.

•Credit cards accepted
•Getting there: Castro Barros stop on the subway’s A line.

*Note: There are two prices on the café menu. Las Violetas is more expensive after 4 p.m. on Saturdays, Sundays and holidays. It’s no coincidence that the costlier menu coincides with the perfect time for a spot of afternoon tea.