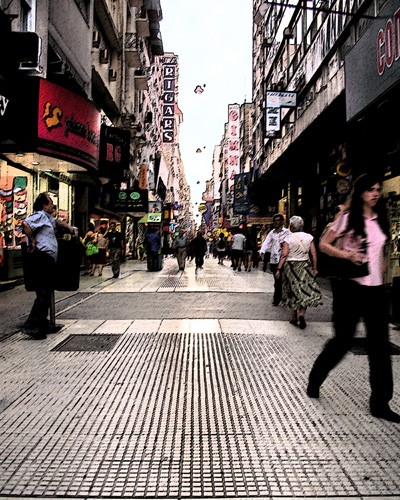 Buenos Aires downtown thoroughfare Florida Street is the city’s most notable pedestrian area and an enduring neutral ground for a diverse cross-section of humanity.

While pleasant for a nice stroll away from the rumbling Buenos Aires buses and home to quite a few architectural gems, it’s admittedly not one of the city’s most dazzling destinations.

On the weekdays, Florida is flooded with office workers and vendors selling everything from tango tours to leather goods on the fancier northern end of the mall and handmade jewelry and hair braiding on the southern side.

While some vendors stick around on the weekends, Florida is decided mellower when no one is rushing from point A to point B.

Although famed as a shopping street in tourist guides, most Porteños will admit that these days Florida is most known as a destination to change money on the black market.

It is also fun to pass through for gawking at busy people and interesting buildings such as Galería Güemes, Galería Mitre, the Bank of Boston Building and the old Gath and Chavez Building.

Florida Street is one of Buenos Aires’ oldest. Early in the city’s history it was a simple footpath along a creek leading into the River Plate.

In 1789 the municipality laid cobblestone here. Later, it was the first street to be paved in Buenos Aires.

It received the name Florida in 1821 to commemorate the important Battle of Florida for independence in what is now the country of Bolivia.

As the city’s elite moved away from the southern neighborhoods and toward the Plaza San Martin area in the 1870’s, Florida became increasingly commercial.

Toward the end of the 19th century a tram running up and down the street was installed.

Shopkeepers successfully petitioned for parts of the road to be made  pedestrian in 1913.

By the 1920’s, construction was booming along Florida Street. Most of the historic buildings that remain on Florida today date from that time period.

The 1922 silent avant-garde film, ‘La Chica de la Calle Florida‘ (The Girl from Florida Street), about a girl who works in a store on the mall, revealed Argentina’s modernity and contained elements of drama that highlighted class divisions, so pronounced at the time and still in evidence today. 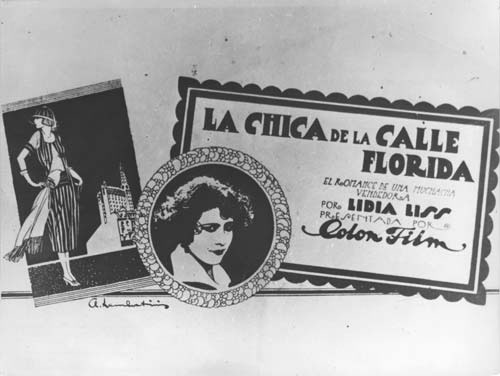 For much of the 20th century Florida remained a destination in itself, drawing visitors from all over the city.

A decline of the shopping street began with the military dictatorship and rough economic times of the late 70s and early 80s but was fully evident by the 1990’s with the closing of the huge high-end shopping mall, Harrods Buenos Aires.

Today, Florida has just a few empty buildings and has once again become a predominately commercial area with its own automobile-free charm.

What the downtown street lacks in classic neighborhood flavor found in other neighborhoods such as Recoleta, Palermo and San Telmo it makes up for with stunning buildings such as Galerías Pacífico.