Buenos Aires colorful neighborhood of La Boca is known to the outside world for tourist destination number one, El Caminito.

But those who dare to wander off the tourist path will discover La Boca is still a lively neighborhood of immigrants with a number of places of interest for art and culture lovers.

El Caminito is ground zero for visitors to La Boca and is among Argentina’s top tourist destinations. El Caminto, or ‘little walkway’ is a pedestrian street set along the old railroad lines built here in 1866. In the 1950’s local artist Quinquela Martín and other neighbors were inspired to paint the houses with bright colors, emulating the spirit of the early immigrants to the city.

Since 1959 El Caminito has served as an open-air museum, where visitors can take snaps of the colorful houses, see some street tango dancing and purchase works of art from vendors who set up along the thoroughfare. El Caminito is photogenic and is probably Buenos Aires biggest tourist trap, with overpriced restaurants and trinket shops. The strip is not representative of the rest of the neighborhood, but unfortunately it is all that many visitors see.

Along the waterway, by the bustop

Declared a site of historic interest in 1949, this cobblestone plaza is where Commander Guillermo Brown established the naval dockyard of his army in the war against Brazil. Named for Antonio Rocha who later built the little plaza here, it was formally known as ‘The Plaza of Sighs,’ so called for the nostalgic sighs of the Genoese immigrants who would congregate here.

From Vuelta de Rocha you can see the emblematic Ferry Bridge of Nicolás Avellaneda. Built in 1908, it was one of 20 bridges of its kind constructed in the 20th century and is one of eight left standing today. It was constructed in England and assembled in Buenos Aires. It is the only of its kind outside of Europe.

Although it remained in disuse since 1960, it was declared an historic monument in 1999. In one of La Boca’s latest triumphs, in 2010 the bridge was re-inaugurated with a fresh coat of orange paint, and glassed-in walkways that give a good panorama view of the city. Pedestrians and bikers no longer have to take boats to reach Maciel Island in Avellaneda, across the water.

One hundred meters from the old ferry bridge sits the newer bridge of the same name that is still in use for automobile traffic.

In 1936 painter Quinquela Martín created this primary school and decorated the classrooms with his murals. On the third floor is the museum, with 90 of Martín’s works depicting life on the port, as well as a selection of works by other Argentine artists. In early 2011, President Cristina Kirchner declared the building a National Historic Monument. Entrance is free with a small suggested donation.

The Bow Foundation is an arts center that features six temporary exhibits per year including world-renowned contemporary masters such as Marcel Duchamp and Argentina’s own Marta Minujín. The foundation also contains a library, rooftop café and an auditorium with weekly culture-related events.

Argentina’s most famous stadium is officially named Alberto J. Armando Stadium but everyone just knows it as La Bombonera (‘The Chocolate Box’). This is the home stadium for Argentina’s most popular underdog winners who made Diego Maradona famous, La Boca Juniors.

The 60,000-person stadium was built by Slovenian architect, Victor Sulčič, who also was part of the team that built the Mercado de Abasto.

The stadium was inaugurated in 1940 and built with the aim to fit in as many people as possible into a reduced space. In the entrance hall visitors can see a mural by La Boca’s most famous son, Quinquela Martín. The painting represents the moment the founder’s of the team selected the club’s colors. On the outside of the stadium is another mural by Pérez Celis.

To see La Bombonera in person ask about our tours of the stadium, book it online or inquire about seeing a Boca soccer match.

The La Boca Volunteer fire department was founded in 1884 out of great necessity. Los Bomberos Voluntarios de la Boca are celebrated for their bravery in fighting against fires, floods and epidemics from their founding to the present.

The current barracks was constructed in 1890 and was declared a site of cultural interest by the city in 2002. The fire department is an integral part of the neighborhood, with a popular band that provides music for local festivals and street parties.

The only wax museum in Argentina with scenes depicting life in La Boca through the years. Scenes by artist Domingo Telechea depict gauchos, Afro-Argentines, sports figures and immigrants who built the country. In addition to the lifelike depictions of the La Boca of old there is a large collection of old photographs, newspaper clippings and tango memorabilia of the neighborhood. It’s located in an Italian Renaissance style house dating to 1902. It was dubbed a site of cultural interest by the city. See there website here.

La Boca isn’t a neighborhood with as many churches as others but San Juan Evangelista is the barrio’s oldest house of worship. It has been on this spot since 1859. The neighborhood of La Boca was officially established after the church hosted a magistrate court here. The current building was completed in 1886. 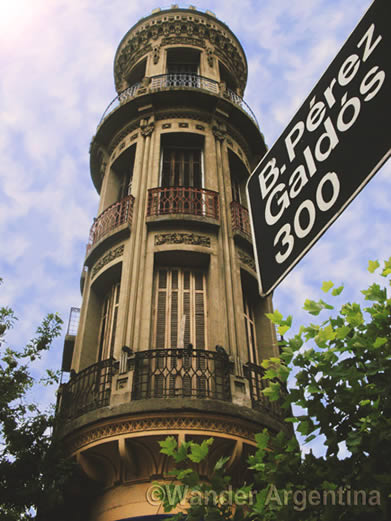 Neighborhood legend says that a down-and-out female painter known as Clementina jumped to her death here at the turn of the 19th century.

Residents can still hear her walking the halls and sometimes screaming at night, prompting at least one former resident to move. Read more about La Boca’s haunted tower here.

A replica of thehouse of one of Argentina’s war heroes and most famous Irish immigrants, Guillermo Brown.

After Brown lost his leg fighting for Argentine independence, he built his home on this land and continued to command the army resulting in victories against Uruguay and Brazil.

Today it functions as the Naval Historical Studies Institute. From here you may spot players from the Boca Juniors practicing on the fields nearby.

A repurposed former power plant built in the eclectic style in 1916 by Italian architect, Juan Chiogna.

The Usina del Arte complex has become an important host for many of the city’s cultural events such as the Buenos Aires International Festival of Independent Film (BAFICI); the youth-focused festival Ciudad Emergente; the Tango Festival and World Cup, and the Buenos Aires Jazz Festival.