Argentina’s Lionel Messi has secured his place as the best football player in history. The only question among soccer fans would be exactly when that fact was established. 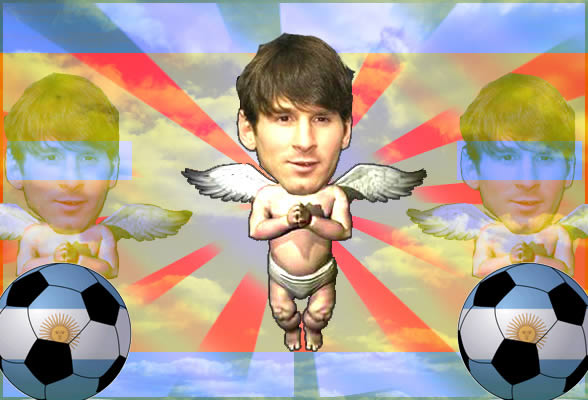 He has won more Ballon D’Or awards than any player in history — a record seven times. He has also won the European Golden Boot award a record six times.

The years that he was passed over for an award are less than those he won, but one gets the feeling that the humble, self-effacing Messi is just as happy to pass the baton to another player in the years he’s overlooked.

Even in years when Argentina crashed out, such as in the Quarter Finals of the 2010 World Cup,  ‘The Flea,’ as Messi is affectionately known, was just so good that he managed to buck the trend of awarding a player from a winning team.

In 2021 he was finally able to complete a dream, winning the Copa America, where he won another Golden Boot and his seventh Golden Ball award.

The one thing Messi’s trophy cabinet is missing is a World Cup title.

After finally leaving Barcelona after 16 straight seasons and joining Paris St Germain F.C., he is now eyeing the 2026 World Cup.

Football Magic with the Ball at his Feet

Football fans, regardless of club or national affiliation, are often stunned by the things Messi is able to do with the ball at his feet.

When watching him embark on one of his jinking, wriggling attacking forays, reactions can range from open-mouthed silence to incredulous laughter.

Perhaps the most amazing thing about him, though, is the early trajectory of his career and the records he has broken along the way.

By 24 years old he was Barcelona’s all time highest scorer; by 25 he was the first player to top 200 goals in La Liga, the Spanish Football League; and by the age of 26 he secured 300 goals for Barcelona.

The peak years for a footballer are generally considered to be between the ages of 28 and 30.

Although now considered a little past his prime, the pint-sized maestro has, for many, already secured his place as the greatest footballer the game has ever seen, surpassing mythical players like countryman Diego Maradona and Brazil’s Pelé.

Even ten years ago he Messi was already consider him to be part of the soccer pantheon:

“Messi is out of this planet, I would say he is so far ahead of the rest of the players playing right now and I would say historically as well. There are not words to describe him,” said 1978 World Cup player, Ossie Ardiles on BBC Radio 5 live.

A look at his list of achievements at such a young age helps to explain the sense of awe that surrounds him.

Aside from a list of individual honors about as long as Messi is short, he has won titles with the Argentina national team at junior level and, most notably with his club side Barcelona.

Apart from representing Argentina at two senior World Cups, Messi has also won an Under-20 World Cup and an Olympic gold medal in national team colors.

He ended his career with Barcelona with an astounding 35 trophies, including ten La Liga titles, seven Copa del Rey titles and four UEFA Champions Leagues, as well as many more minor cup titles.

The award Messi is most proud of is surprisingly his 2008 Olympic gold medal that he won in Beijing, In a 2017 interview with the Spanish version of Esquire he said,

“The Olympic gold in 2008 is the win that I value the most because it is a tournament that you may play only once in your life and involves many athletes from diverse disciplines.”

Messi’s career could have been over before it even began because his small stature once meant that no big clubs in Argentina were willing to sign him up.

These days, Messi’s diminutive stature is often seen as an advantage on the field. As with his predecessor, Maradona, his low center of gravity is pinpointed as one of the reasons he is able to stop on a dime and change direction instantly, sending less agile defenders reeling clumsily past like novice ice skaters.

Lionel Messi was born in Rosario, Santa Fe on 24 June, 1987 to a lower-middle class family.

At the age of eight, he was recruited into Rosario club Newell’s Old Boy’s youth team, where his considerable skills drew the attention of several big clubs.

The tiny attacking midfielder suffered from a growth hormone deficiency though and Argentine teams such as River Plate could not afford to pay for his treatment.

Fortunately, Barcelona scouts had also spotted the talented youngster, and offered the 13-year-old Leo a trial in Spain.

Barcelona’s coaching staff were impressed with what they saw, and the club offered to pay the medical bills for Messi’s family if they were willing to uproot to Catalonia.

They accepted the deal and Barcelona enjoyed the player’s loyalty for a total of 21 years.

Messi debuted in the Barcelona first team in 2003 at the remarkable age of 16-and-a-half in a friendly match, making him the youngest ever Barcelona player at the time.

His competitive debut came less than a year later when he established himself as a club superstar by scoring three goals against arch rivals Real Madrid in the 2006-07 season.

Since putting early-career injury worries behind him, Messi has soared to success.

His Barcelona team was regarded for many years as the greatest team in history, and Messi was the jewel in the crown.

The year 2010, was when the world began to understand that Messi was unstoppable.

That year he scored an astonishing 42 goals, made 15 assists and completed 166 dribbles in the Spanish league, putting him at the top of the pile in all categories.

Internationally, accolades for Messi have been flooding in for years but strangely, despite his talent, good-looks and affable manner, the Argentine public has taken longer to warm to him.

A common gripe amongst media commentators and Argentina fans was that Messi never performed as well for the national team as he did for his club side.

The theory went that he moved overseas at such a young age that he felt more Catalan than Argentine and therefore gave more to Barcelona.

Messi was often compared unfavorably to the man many in Argentina regard as a demigod, Diego Maradona.

Messi, shy and retiring off the field, was said to lack the spark and leadership qualities of ‘El Diego.’

This attitude may have a lot to do with the fact that Messi never played senior football in Argentina.

Most Argentine players who go on to play for big teams in Europe earn themselves a rabid fan base back home by spending a year or two with Boca, River or one of the other big teams in local football.

Less talented players like Martin Palermo or Ariel Ortega, who failed to make an impression in Europe’s powerful leagues initially had a higher profile in Argentina than Messi because they spent years playing in the national league, and are therefore highly visible to local audiences.

It would be easy to understand why Messi would have felt more loyalty to Barcelona, as local teams such as River Plate passed over the opportunity to sponsor him when he was just a promising youngster who needed expensive medical treatment.

But through the years Messi has gradually won over Argentine fans as well, simply because he keeps performing at a phenomenal level.

Although he was unable to score for Argentina at the 2010 World Cup, Messi was instrumental in almost all of the team’s goals, and was named by FIFA as one of the 10 best players of the tournament.

In 2014, Messi led Argentina to the World Cup final in Rio, although the team was again defeated by Germany 0-1, after extra time.

After the death of Diego Maradona in 2020 (the other greatest footballer in Argentine history) and leading the Argentina national team to their 15th Copa América championship in 2021, it’s fair to say that Argentine fans have since embraced him.

Lionel Messi had to leave the team he has been faithful to his whole career due to a technicality, although there was speculation he would leave for a while.

Messi hesitantly remained during through the 2021 season at Barcelona, declining to sue the club to escape his contract. During his last season with Barcelona, he helped them win one last title, the Copa del Rey.

The news that Messi would definitely be leaving Barcelona came only five days prior to his expected contract renewal.

Under Spanish soccer league rules established in 2013, there is a compensation cap, which limits player wages and expenses to 70% of a club’s total income.

Due to the COVID-19 pandemic, FC Barcelona expected to shave off $200 million in team salaries just to sign Messi. Even with that, Barcelona F.C. realized there was no way they could keep their superstar.

Messi was a free agent, and although 34-years-old he did not end up taking a pay cut. The French league, Paris Saint-Germain, offered him a two-year contract of $41 million dollars per year, with the option to extend the contract one year.

“I am impatient to start a new chapter of my career in Paris,” said Messi after the deal was signed.

“The Club and its vision are in perfect harmony with my ambitions. I know how talented the players and staff are here. I am determined to build, alongside them, something great for the club and for the fans. I can’t wait to hit the lawn at Parc des Princes,” he told reporters in a press conference.

Messi immediately won the hearts of Paris’ more subdued football fans, making a spectacular goal in the first game that sealed the win.

Messi is only the second footballer in history to earn over a billion dollars during the course of his career. Even at 34 years-old he remains among the highest-earning athletes in the history of all time.

He has been named by Time Magazine among the 100 most influential people on the planet twice.

He is the first team sport player and first footballer to win the prestigious Laureus World Sports Award for Sportsman of the Year in 2020.

Since most Argentines under 30 years of age won’t remember first-hand Diego Maradona’s heroics at the 1986 World Cup, and are perhaps even tiring of hearing older generations eulogize the man, Messi has become the next generation’s idol.

The only thing missing from Messi’s trophy cabinet is a World Cup, and now that he signed with Paris Saint-Germain Football Club, it looks like he has at least one more chance in 2026.

Whether The Flea manages to pull off that feat remains to be seen.

Even if he doesn’t, it’s likely that a lot of grandchildren in 50 years time will get bored to tears listening to stories of Lionel Messi, the soccer star who mesmerized the masses.

Even the man who was most in love with the cult of Maradona, Diego Maradona himself, crowned Messi as his successor way back in 2010 :

“I have seen the player who will inherit my place in Argentine football and his name is Messi. Messi is a genius.”