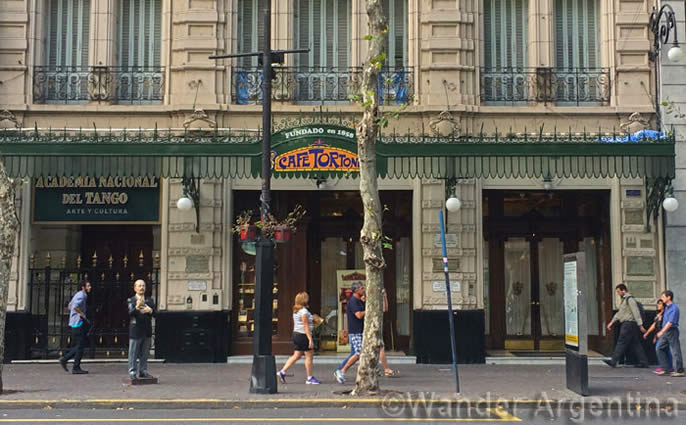 The Gran Café Tortoni is Buenos Aires’ most famous cafe. This historic Parisian-style cafe is a top choice for visitors who only have time to visit one café in Buenos Aires.

Located on Avenida de Mayo, just steps from the Plaza de Mayo, Tortoni was founded in 1858 by a mysterious Frenchman who we only know had the last name of Touan.

The Frenchman based Tortoni on a favorite cafe on Boulevard des Italiens in Paris. From the beginning, just like the original, Tortoni has been a meeting place for famous artists and scholars.

A Gathering Place for Intellectuals

Many tables in the cafe feature plaques that bear the name of the famous Buenos Aires writers, musicians, intellectuals and popular public figures who have gathered at these tables including writer Jorge Luis Borges, poet Alfonsina Storni, and tango singer Carlos Gardel.

There was also a thrifty group of young intellectuals led by artist, Benito Quinquela Martin that regularly met in the basement in the 1920s called the Agrupación de Gente de Artes y Letras (Arts and Letters Association).

Buenos Aires tourism comes full circle here, as it was Quinquela who designed La Boca’s Caminito — another quintessential Buenos Aires attraction that visitors don’t want to miss. (There is also a fine arts museum in La Boca bearing his name.) 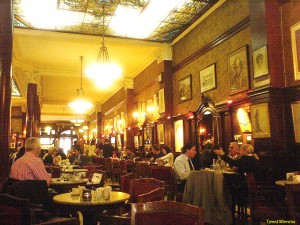 Cafe Tortoni was inspired by the fin de siècle Parisian coffeehouses that were popular meeting places for Parisian elite in the end of the 19th century.

Until Tortoni relocated to its current location in 1880, the building was the location of the ‘Scottish Temple’ designed by Norwegian, Alejandro Christophersen.

Visitors see why this is Buenos Aires cafe is considered one of the world’s most beautiful cafes. It has majestic, intricate moldings, a $1.4 million Tiffany glass ceiling, many Tiffany lamps and — like many classic Buenos Aires cafes — smooth, round marble-topped tables.

The waiters at Tortoni are top-notch, although they have a reputation of being gruff toward those whom they deem too casual for Tortoni standards — they let it be known that you’re at their mercy, at least, they certainly seem to have a presence that commands respect.

In the 55-seat Alfonsina Storni salon downstairs there are interesting daily events, including live radio performances, poetry readings and the low-key but affordable tango show.

Be sure not to miss the historical photos that grace the walls, the former barbershop in the backroom and the game salon where visitors can play billiards, dice and dominoes.

How to Get There & When to Go?

Since the Tortoni café sits just a few blocks from the Casa Rosada, City Hall and other important government buildings, it’s a convenient spot to relax over a coffee if you’re doing some sightseeing.

It’s also easy to get to on the Buenos Aires subway — in fact the Piedras stop of Line A is right outside the cafe.

Due to its popularity and the new-found ‘Instagram effect,’ you may want to avoid going to Tortoni during peak hours (generally after work during the week) — the place can get overrun by tourists and the acoustics can make it hard to hold a conversation.

Lately there have been so many tourists that there is a regularly a line outside the door just to enter the cafe, so those looking for a quick bite to eat should be forewarned.

What to Order at Tortoni 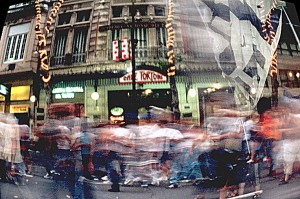 The food at Tortoni is slightly overpriced standard café fare.

Tortoni is more of a place to enjoy soak up the ambience of the Buenos Aires cafe, but it’s not recommended to eat a full meal here.

A good bet is to order a small snack such as a typical Argentine dessert or churros with a café con leche or submarino.

The cider on tap and the Argentine style tea-time or merienda featuring a meat and cheese platter know as a picada are also menu popular items.

While here, take a worthwhile detour upstairs to the World Tango Museum to see the National Academy of Tango’s Belle Époque mansion and tango artifacts stretching back to the birth of the Argentina’s most famous dance.

The Tortoni’s authentic tango show downstairs is one of the most affordable in town compared to the flashier dinner tango productions offered throughout the city.

Visitors will have to drop by to purchase the tango show tickets for Tortoni in advance of the performance and should be aware that the show has adult subject matter that may not be suitable for children.

Those interested in classic architecture of also won’t want to miss nearby beauties such as the Gath and Chavez building, the Jesuit-designed exterior of Galeria Mitre, and the inside of Galeria Güemes. 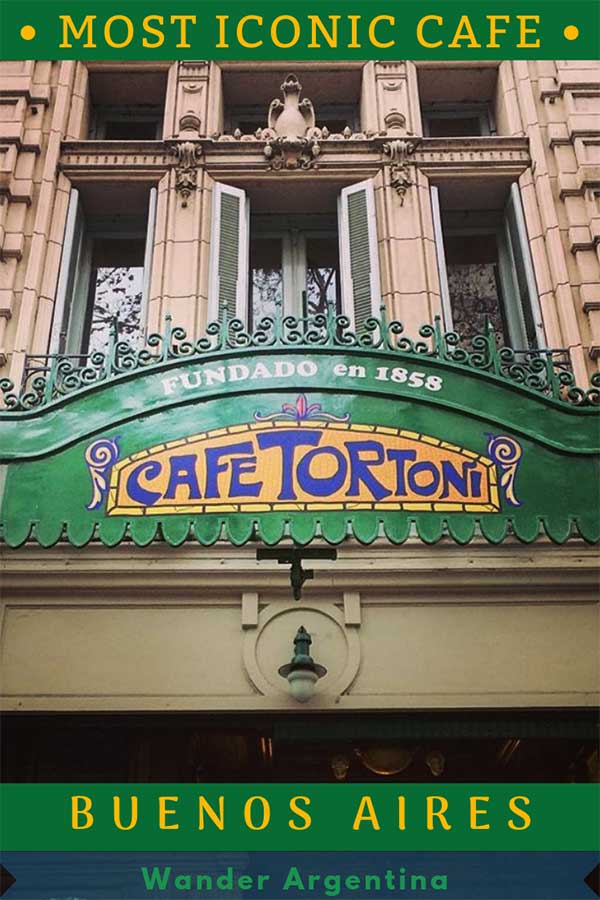 How to get to Cafe Tortoni:

Since Tortoni is near the Plaza de Mayo, the central point of Buenos Aires, it is very easy to arrive here by the Buenos Aires subway.

The five main fingers of the subway (A, B, C, D, E ) all have stops that are walking distance to the cafe. The A Line’s Piedras stop is right outside the cafe. The E line’s Bolivar stop is a couple of blocks away, as is the Catedral stop of the green D Line. The B or C line’s 9 de Julio stop or the C lines Avenida de Mayo stop will also work. 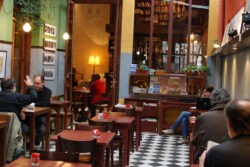 If you’re looking for a cozy spot to relax, nourish the brain or get some work done after a wild night of partying in Buenos Aires, check out Libros del ... Read more

Do you remember the cafe La Poesía, that magic night in San Telmo? Buenos Aires devised our meeting, so romantic and sweet, Lulú —Horacio Ferrer (from the song, Lulú) La ... Read more

Mark’s Deli and Coffee House brings a taste of the Big Apple to the upscale confines of Palermo Soho. What’s on the Menu at Mark’s Here you’ll find stacked made-to-order ... Read more

Café Retiro reveals Buenos Aires’ former glory days like many similar cafes in the Argentine capital, yet here the grand interior contrasts sharply with the chaos found outside its confines. ... Read more