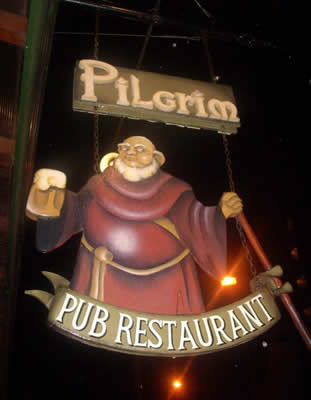 The Pilgrim has closed. Their Blest Beerhouse 11k outside of Bariloche is worth a visit. You can also make it a stop if doing the La Ruta de los Siete Lagos (‘Seven Lakes Route’).

Bariloche’s most enduring Irish pub, Pilgrim has a great atmosphere and is a cozy place for an afternoon meal or an aprés-ski.

On summer days it’s the perfect place to sit on the patio and enjoy a pint. After the dinner hour Pilgrim turns into the crowded party scene you’d expect from an Irish bar, and there’s often live music.

The menu makes an attempt at explaining the name: ‘We should look for pilgrimages success in the numerous monasteries. One of the reasons is because monks know how to make visitors happy. They wait for them with a good beer…’

Pilgrim is owned by the same folks from fabulous Blest Beerhouse located a bit outside town on Bustillo Avenue.

Pilgrim has wifi access for those traveling with laptops, although you’ll probably only get work done during the day.  Try some of the great micro-brew beers such as the Patagonia red ale. Although the Blest lagers are produced locally, they are not the best on the menu.

The menu has some creative touches, including attempts at some vegetarian dishes, but expect run-off-the-mill pub fare. The tables towards the back seemed to be reserved for couples that want to sit and smooch. If you are single or traveling alone, you may want to grab a spot closer to the bar so you don’t have to listen to a make-out session. The folks are friendly here, so you’ll likely make some new buddies.

Bariloche, nestled along the shore of Lake Nahuel Huapi and surrounded by snow-capped peaks serves as the gateway to the playland of Patagonia. The Rio Negro province’s largest city offers ... Read more

Mount Tronador, only 90 kilometers from downtown Bariloche, is one of the most accessible and popular destinations in Patagonia. The ‘thundering mountain’ is the highest peak in Nahuel Huapi National ... Read more

La Cueva restaurant is one of the most exclusive and adventurous, if not exactly eco-friendly, dining experiences you can have in Bariloche. As its name suggests, ‘The Cave,’ is set ... Read more

Cerro Catedral in the vast winter play land of Argentina’s Lakes District is the country’s largest ski destination. Catedral Alta Patagonia, as it’s officially named, is popular both for its ... Read more

Hostel Inn Bariloche may not be the absolute cheapest or most diverse hostel in Patagonia’s largest city but it wins on location, cleanliness and stunning views. As a Hostel International ... Read more