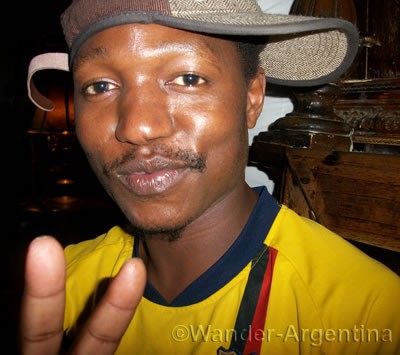 • How in the heck did you get from your native Guinea to Argentina?

I came here by hiding out in a cargo boat for 17 days, but it’s not like my family abandoned me or anything like that. I was escaping because I didn’t like the politics and the corruption of Guinea.

My family isn’t poor by African standards, although there were a few years that my dad — who lives in Poland — didn’t send any money.

After I got here, my mom spent a bunch of money looking for me because she didn’t know where I was. I feel bad about that. I kind of abandoned myself, really.

• You’ve traveled to many countries by hiding out on boats before you got here. Can you talk a bit about that?

The first boat I ever took went to the Ivory Coast and then to Ghana. So I started to travel around Africa and went to Burkina Faso and then to Mali. I hopped my first boat across the ocean when I was 11 years old. I went to Uruguay. It took like 15 days but they sent us right back to home, first to Senegal and back to Guinea.

• When you got on that boat to Uruguay did you know where it was going?

No, you never know. It was a Filipino boat. The crew were nice and helped me out. They told me what to say next time to qualify for refugee status.

The next boat I was on went to Venezuela. That was a Chinese boat. When they discovered us hiding out they wanted to kill us, because once you’re discovered, the shipping company is responsible for you.

They gave us rotten food and tried to drown us by filling the engine room with water. When we arrived to an area of the ocean with a few navigational lights, they said, “Okay we’re in New York, you should jump off and swim from here,” but I didn’t see land anywhere so I said, “No way!”

• How many kids were on that boat?

There were five us on that boat. I was the oldest. I always tried to travel with younger kids because it might help to be received as a refugee. Venezuela didn’t allow us in though — they sent us back on the same boat. The captain of that boat — when he finally found out about us — was a nice guy. He took us to Panama.

When you would get home, what would your mom say?

My mom didn’t want me to travel. She wanted me to stay and study but she also knew the problems I had there. My parents are from two different tribes – Fula and Susu — so I’m not accepted by either. So since I wanted to travel she just tried to give me advice about how to take care of myself.

Did you ever get in trouble trying to sneak on a boat?

Yes, one time I got caught trying to get on a Vietnamese boat and a guy chased me off with a bow and arrow. I jumped in the water and swam away underwater.

• Where did you go after you got back from China?

I ended up in Egypt next. They were willing to accept me, since I am Muslim and wanted to study. They took me to see the pyramids and stuff but it was too hot there and I didn’t really want to stay in Africa. They put me and my friend on a plane to Morocco. We were supposed to transfer to another flight home, but we just walked out of the airport.

Then we went to Russia. We were freezing our asses off — merde! We were there for less than a week, but they gave us really hot food and took good care of us.

Then we went home. By then I was 16 years old and was planning to study in the university there, but since my mom didn’t vote and wasn’t supportive of the ruling party in Guinea, I wasn’t allowed to enroll.

There were also people in my father’s family putting witchcraft on me. I never believed in it until they put a spell on me and I started to go crazy. I couldn’t take it, so I wrote my mom a note and left it on the dresser and just left.

By this point I knew how to take a boat. You have to know how to swim, how to wrap up your food in plastic bags so that it floats, and how to climb up into the boat. There were other boys that wanted to travel so they would come and say ‘I have food’ or whatever and I’d show them how to sneak onto the boat.

Okay so how did you finally get to Argentina?

I had been looking at a map and thinking that Argentina would be a good place to go, since it’s south. The only thing I really knew about it was Maradona, who I loved. By coincidence the next boat I got on went to Rosario. I got off and said, “Wow! I’m in the land of Maradona!” That was in 2004.

• And you said you were sort of adopted by a local family there. How did that happen?

I used to go running and I would run through parks and by spots where kids were smoking herb and playing basketball, so I got to become friends with some of them. I was living in a pensión (cheap hotel) and when the bicycle that my best friend built for me got stolen there, his mom invited me to live with them. He’s still my best friend.

• Why do you prefer to be in Buenos Aires instead of Rosario now?

Rosario is a nice place there are a lot of parks there, but it’s complicated for us there. They are even more racist than in Buenos Aires. The police would arrest me and take all the money I had on me before letting me go free. People would yell at me on the street, “Hey Negro! Go back to where you came from!”

I got in a lot of fights there, that’s how I lost my tooth. Now I’ve learned — I just ignore them and mind my own business.

• You said you also got shot in Rosario. What happened?

We were taking cocaine. Some friends of my friends came — I had seen them around, I had played basketball with them before. All of a sudden one of them just took out a big gun and started waving it around. They accused me of stealing from them, but it didn’t even make sense because at this point I had everything I needed, I lived with a family and since I had refugee status I got money from the government.

So I got shot. It happened very fast. The bullet went through my arm, out my shoulder and into my cheek. You can see the scars. So then the cops came and they called an ambulance. It was really weird, I still don’t understand it, because there were no arrests and it didn’t even come out in the newspaper. Usually when something like that happens in Rosario it’s all over the news. In fact my friend got shot and when that happened it was in all the papers and on T.V.

I’ve thought about it a lot. I really don’t know. I think it was a set-up of some sort or they were just jealous. I’ve even considered that the production company (of the documentary that he stars in) had something to do with it. I just really don’t know.

• So you are the star of the documentary David y El Gran Río by Rubén Plataneo to debut at the Buenos Aires International Independent Film Festival and you have a C.D. coming out at the same time. Do you know when?

I think in March or May — they keep changing the date. I just received the cover of the C.D. I don’t like it – it has a drawing of me riding a whale. I came here on a boat, not a whale!

• How did you get a label to pick you up?

I hung out with the hip-hop troupe La Resistencia in Rosario. The production company for the documentary presented my work in a competition and I won. So it’s sponsored by the province of Sante Fe and SADAIC. It’s going to come out in Rosario, Buenos Aires, Cordoba, Guinea and, I think, Germany.

• Do you still get help from the government of Argentina?

No, they only help you until a certain age. So they helped me for four years and for fours years I’ve been on my own.

• How do you get by financially?

My dad sends me money and sometimes I have gigs in clubs. It’s not easy for a black guy here because there are so few of us, so we stick out. They see my face and don’t want to hire me. I did work in a restaurant in Rosario for two years. They paid me 40 pesos a day plus tips.

I was even going to work at Burger King. I ran around all over and did all the paperwork and finally they told me my work papers were no good, but I think it was because I’m black.

• You said that at some point you started smoking crack while you were here?

Yeah, well I had smoked it before in my country, they have a type of crack there, but after my adopted mom here died suddenly, right in my arms, of a heart attack, I got depressed and I started smoking it again.

I just stopped – it’s shit. Also my mom tells me not to mess with it, I love and respect my mom a lot, so I listen to what she says. I want to study, my family also wants me to study — that’s why they send me money.

• You’re Muslim, like most Guineans, do you still practice?

A little, I’m not that strict, I pray maybe twice a day.

• You gained refugee status but are now having difficulties because you lost your DNI (National Identity Card). What happened?

My dad sent me money through Western Union and you have to show your DNI when you pick up the money and I accidentally left it there. When I got back the guy said he didn’t have it, so now I have to apply for it all over again.

• So now after spending a third of your life here what do you think of Argentina?

They bust your chops here these days. I liked it for Maradona but now they are making things difficult for us. I want to leave but I have a daughter here and my mom wants me to stay and get my high school degree so I can go to college. I’m hoping things will be better after the documentary and my C.D. come out.

I told my mom that I want to go to Canada. I had a girlfriend from there. It’s cold there, but if there is no discrimination it would be worth it.