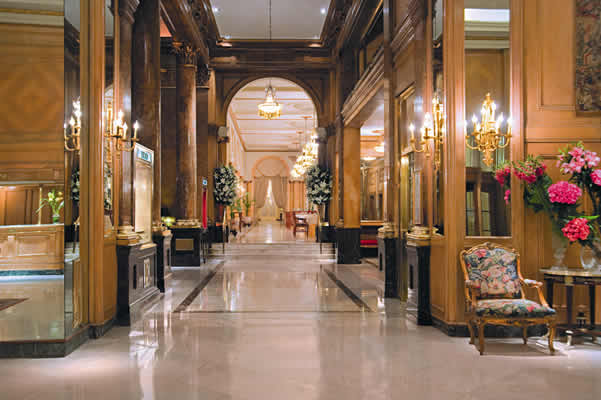 The aptly named, Alvear Palace Hotel is a five-star hotel and Buenos Aires institution that exudes the tradition and luxury of Argentina’s golden era a century ago.

The Alvear debuted in 1932, after ten years of construction. It features a grand entrance with impeccable doormen, red carpets to welcome guests, marble floors and opulent Louis XVI décor.

As tourism to Buenos Aires slowed during the Dirty War in the 1970s and 80s, the hotel fell into disrepair until it was purchased and revamped by the Sutton Group in the 1990s.

Today it is one of four Argentine hotels that makes it onto the list of ‘Leading Hotels of the World,’ put out by the hospitality consortium of the same name.

The Alvear is set along one of the city’s most famous thoroughfares in Buenos Aires’ aristocratic old money neighborhood, Recoleta. Guests are in walking distance to the world-class Museo Nacional de Bellas Artes, and the city’s opulent and iconic permanent resting place, Recoleta Cemetery.

VIP Guests through the Years 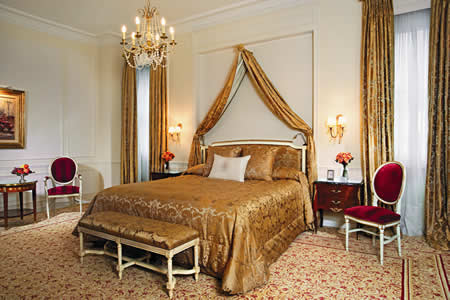 Jet-setters, celebrities, politicians and self-appointed VIP’s who would chose the Waldorf Astoria in New York or the Langham in London stay at the Alvear while in Buenos Aires.

Suites at the Alvear Palace

Guests can expect fresh cut flowers and fruit every day.

A butler is assigned to every room and with old world congeniality will draw a bath for you, iron your clothes and turn down your bed every night.

Reserve the Royal Suite if you want to stay in Buenos Aires’ most decadent hotel room, but expect a bill in the quadruple digits.

Other Alvear amenities include a pool, business center, spa and a roof garden with spectacular views of the city.

Restaurants at the Alvear

The Alvear is also renowned for serving up the most luxurious brunch in Buenos Aires at their restaurant, L´Orangerie. In the afternoons they also serve a traditional English-style high tea with homemade scones and a variety of loose teas.

La Bourgogne, the beloved onsite French restaurant that previously existed here was replaced in 2018 by the Alvear Grill. The contemporary Argentine restaurant led by chef Sergio González Crubellier gets passable reviews but is struggling to live up to the legacy of La Bourgogne.

The Alvear is owned by David Sutton Dabbah, who is also partial owner of the beautiful Galerías Pacífico and Barlioche’s most exclusive hotel, the Llao Llao Hotel and Resort.

Dubbah is a Buenos Aires-born orthodox Jew who emerged from a humble background to become a titan of business in the city. He first started with a small perfume shop in 1970 in the Once neighborhood before moving into the hotel industy.

In recent years the Dabbah Group also constructed the Alvear Icon Hotel and Residence in the modern Puerto Madero neighborhood. The shiny, new 32 floor hotel and residential property is the tallest skyscraper in Argentina, and the fourth tallest in Latin America.

The Alvear Icon and Puerto Madero in general is more suitable for travelers who use a wheelchair and ideal for those looking to enjoy fresh air (the Buenos Aires ecological reserve is within walking distance), great restaurants, and a chance to experience a tango show at Madero Tango.

There is an extensive buffet breakfast provided for guests and the 31st floor Kayla bar and restaurant. Above Kayla, the Crystal Bar is considered Buenos Aires’ best sky bars, providing great panoramic views of the city and the River Plate. Get there early for a good seat and to watch the sunset.

This hotel is a good high-end option for Kosher visitors as the property includes Glitter, a deluxe glatt kosher restaurant as well as Milk & Co, a kosher dairy bar. Shabbat keys are also available.

The original Alvear is a place of decadence and was founded long before sustainability was a popular concept, but hotel manager, Chantal Holjevac says the Alvear recycles their paper, cardboard, plastic containers and even the cooking oil, which is later used as fuel.

Another newer Dabbah Group property in the downtown Retiro neighborhood is a better option for business travelers, due to its location and business amenities.

Set in leafy Plaza San Martín, there is plenty of action nearby with Sante Fe Avenue and the pedestrian shopping thoroughfare, Florida Street.

There is an on-site fitness center with a pool. Rooms have great views overlooking the city and start at about $230 per night. Although there are many five-star hotels around Plaza San Martín, guests should be aware that this is a higher crime area than the other two Alvear properties.