Argentines are sweet tooths and it’s no different at Christmas, with fruitcake, sweet nougat and chocolate treats making the rounds. 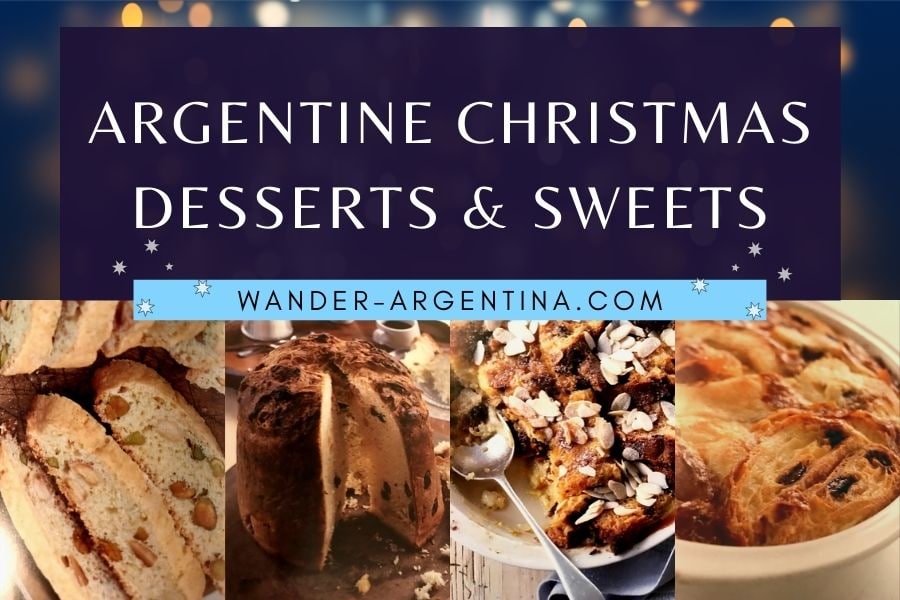 If you are wondering what Argentine desserts are popular during the hot summertime Christmas, this guide is for you.

After Christmas dinner the attention turns to the mesa dulce or dessert table, where you are bound to find some of the following traditional Argentine Christmas treats.

Pan dulce somehow doesn’t suffer the same bad reputation as its northern counterpart, fruitcake, so it remains an after-dinner or merienda (tea-time) favorite during the days between Christmas and the New Year.

Pan Dulce is a popular gift and is among the most common Christmas-time desserts in Argentina.

The fruit-filled sweetbread is munched along with the brindis, or toast, at midnight on Christmas and the New Year.

Panettone is a higher-end version of pan dulce, originally from Milan, Italy.

It is a specialized citrus flavored bread with bits of fruit and nuts.

It doesn’t have whole eggs, just the yokes and lots of butter.

The specially prepared bread takes 24 hours to rise and is baked in an egg-like mold and then wrapped in fine, decorative paper.

Pionono, served in its savory form as a Christmas eve appetizer, can also be found on the sweets table.

The bizcochuelo sweet sponge cake is filled with dulce de leche, jam or fruits and chantilly cream and is the perfect accompaniment to a glass of some sparkling Torrontes.

Bread pudding (budín de pan) is eaten year round, and also shows up on Christmas dessert tables, at least in cooler parts of the country such as southern Patagonia.

Those who get off the beaten path may also find budín Inglés (English pudding) made with cognac, raisins and nuts.

Those who find themselves in Patagonia and who like a bit more kick to their cake will enjoy torta negra galesa, a black bread made with fruits, nuts and whiskey.

Patagonian Welsh black cake is a legacy of the hardy Welsh settlers who settled in the region.

Christmas is a kids-oriented holiday in Argentina, so candy makes a big appearance on the sweets table.

Turrón, sweet nougat mixed with peanuts or almonds, is a Christmas classic, that was brought by Spanish immigrants.

It is cut into bite-size squares and is a central feature of the Argentine mesa dulce.

The good stuff is with almonds.

If you understandably want some right now, order some crunchy almond turrón made in Spain for delivery.

Although seen all year, Mantecol, the Argentine version of Halva, made popular by a Greek immigrant in the 1940’s, is also Christmas time favorite.

It’s a peanuty nougat bar that is always placed by the cash register to tempt sweet tooths at this time of year.

Garrapiñadas are peanuts or almonds toasted with sugar.

Peanuts are called ‘maní‘ in Argentina, not ‘cacahuete‘ as in other countries.

Made fresh and sold on the streets of Buenos Aires as a quick snack, they make it onto practically all the Christmas Eve sweets tables.

The nuts are roasted with sugar and when crystallized, are a crunchy sugar-coated protein-rich snack.

The name of this sweet derives from the word garapiñar, meaning ‘to bathe sweets in the syrup until it forms lumps.’

As with alfajores, this snack was brought to Argentina via Spain by Middle Eastern immigrants.

Chocolate covered almonds are one of the most addictive treats to munch on during the holidays in Argentina.

They are a truly seasonal treat, only seen in grocery stores around the holidays.

Since they are an imported item they are a little pricey in Argentina, so chocolate covered peanuts or raisins may stand in for almonds.

Champagne, cider and all variety of sparkling wines are also found after dinner and accompanying the dessert table.

Sidra, sweet cider, is seen everywhere around Christmas time and is used for end-of-the-year office toasts.

It is a common end-of-year gift for the maid or doorman.

A nice bottle of bubbly is a good gift to bring to someone’s house for a party, especially for the toast on Christmas and New Year’s Eve.

A bottle of Brut Moët & Chandon Champagne would be a safe choice to take to a party, but thanks to Argentina’s own wine industry there are a lot of affordable champagnes that are delicious and reasonably priced.

Look for a bottle of Brut champagne made from La Rioja’s Torrontés grape for the most uniquely Argentine sparkling tipple to bid goodbye to 2022.

¡Bottoms up and Feliz Navidad!

→ A Guide to Argentina’s Christmas Food

→ Check out our list of Food Tours in Buenos Aires