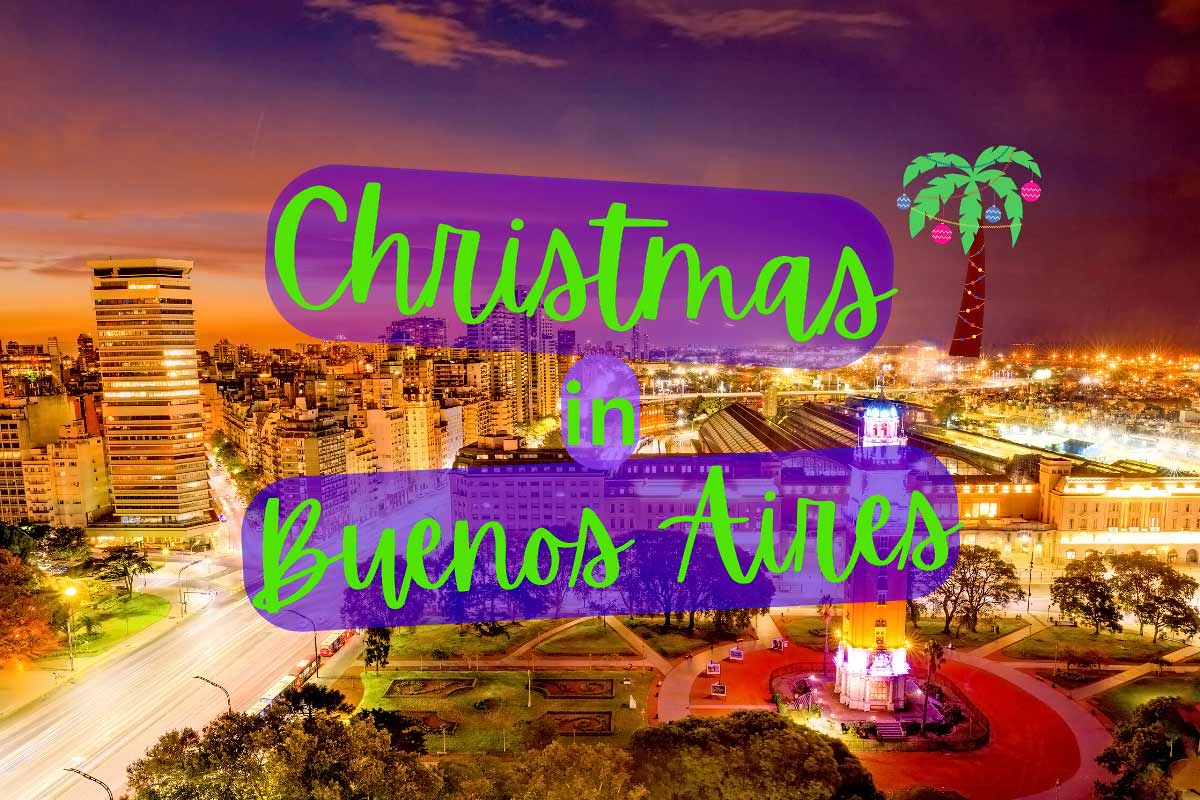 Fireworks, warm temperatures, calorie-laden food, and dancing until dawn — Navidad in Buenos Aires is a party that is literally not for the faint of heart.

It may be Christmas but It’s Hot as Hades!

Christmas falls in summer in the southern hemisphere, so traditions such as Santa Claus in full regalia, real pine trees and Christmas stories around the fireplace do not translate temperature-wise, making Christmas a mash-up of European and South American traditions.

The main day of celebration in Argentina is on Christmas Eve and the evening plays out in a manner oddly similar to New Year’s Eve in other predominately Christian countries.

The Christmas season is nicely contained by specific religious dates in Argentina.

It starts on the Fiesta de la Virgen (Feast of the Immaculate Conception) on December 8th, a Catholic holiday revering Mary.

On this day families put out a nativity scene, a faux Christmas tree and string up lights and decorations.

Argentines are mainly Roman Catholics but most celebrate Christmas in a secular manner.

Since the kids are out of school and it’s summer, those who have the funds usually go to a vacation getaway.

Parents can take kids to see Santa Claus and snap a photo at major shopping malls.

Well-off families from Buenos Aires often head to places such as Punta del Este in Uruguay while middle class families are partial to the Atlantic Coast.

The benefit for those in Buenos Aires is that the city is relatively empty during the holiday season, with less people and traffic.

Church bells ring at midnight on Christmas, but in urban areas not many people continue the tradition of attending the Miso de Gallo (Rooster’s Mass) at midnight.

Those who want to go to mass, but not miss the toast at midnight head to church earlier in the day.

Buenos Aires’ Catedral Metropolitana, where former Cardinal Jorge Mario Bergoglio (aka Pope Francis) led mass for many years until being chosen as pontiff, now has mass at 9 p.m. and three on Christmas Day instead of midnight.

The central church in any city or pueblo across the country will most likely have a midnight mass, and it’s a chance to see the inside of some beautiful cathedrals.

Most people celebrate at home with friends and family on Christmas eve, with some watching mass on TV.

Visitors and those with no talent or time to cook may go to one of the many restaurants, high-end hotels, or tango dinner shows that offer a fixed-price menu on Christmas Eve.

Argentines will celebrate at any cost, and restaurants take full advantage – eating out on Christmas Eve comes at a premium.

Those planning to dine out will want to make reservations in advance.

Attire at your average Christmas party or restaurant in Palermo on Christmas Eve is semi-formal, with women donning summer dresses and men wearing a button up shirt, and weather permitting, a sport coat.

Visitors who don’t have anywhere to go may want to consider La Cabrera, one of the high-end hotels with a restaurant with a special Christmas menu or one of Buenos Aires’ many tango dinner shows.

Madero Tango‘s Christmas Ball is a good choice as there is a fireworks display on the waterfront and there is usually a pretty good party on Christmas in Puerto Madero, where the show is located.

They also provide transportation home (thankfully, as it’s all you can drink!) all night so that those who aren’t quite as nocturnal as the locals can get to bed before sunrise.

Younger people just gather along the water on the docks or the Costanera Sur to hang out and party outside.

Unlike in many other South American countries, children in Argentina do write cards to Santa Claus.

The range and money spent on gifts depends on the family but is usually modest compared to more consumer-oriented nations.

Argentina is a nocturnal country, so no one bothers to send children to bed with threats that Santa won’t come if they don’t — instead they find a way to distract them, at which point Mr. and Mrs. Claus place gifts under the tree.

The money spent on gifts depends on the socio-economic level of the family, the rate of inflation and the state of the nation.

Most of the gift giving is focused on younger children.

Families with older kids often exchange one gift with each member of the family.

Purchasing gifts for friends is optional, although bringing food or drinks to share, such as sparkling wine (not sidra hopefully!) for a toast, at gatherings is a common courtesy.

A loaf of Panettone is also a common item to bring when visiting people’s homes on the holidays, particularly earlier in the day.

An exception on the gift front are small token gifts — girlfriends sometimes present pink underwear as a gift to single gal-pals for good luck in finding love in the New Year.

Everyone toasts Merry Christmas at midnight on Nochebuena (Christmas Eve), and gifts are opened afterward.

Christmas in Argentina, and especially Buenos Aires, most resembles New Year’s when midnight strikes, everyone toasts and the skies alight with fireworks.

Plan to be somewhere secure and strategic at this hour to watch the fireworks.

While celebrating with fireworks has decreased in recent years, still in some neighborhoods the streets can resemble a war zone around midnight, with firecrackers popping everywhere, sirens blaring, a few stragglers on the sidewalk and dogs running panicked.

In Buenos Aires, the adventurous may make their way to the Obelisco or a park such as the Bosques de Palermo (Palermo Forest) to watch the fireworks display.

Another classic — if slightly dangerous tradition — is to launch paper globes with candles inside, that allow them float into the air.

Due to the fire hazard, this is seen less in Buenos Aires’ neighborhoods these days and more in other areas of the country.

The backlash against fireworks increased starting in 2012 when a polar bear died at the Palermo Zoo due to heat combined with the stress of the exploding skies.

Thankfully, partly in response the to Polar Bear’s death, the Buenos Aires zoo has been converted to an Eco Park.

As the headlines report at the end of every year, there are a dozens of injuries across the country caused by pyrotechnics, so their unsupervised use is waning.

Nationwide legislation was passed in 2021 to only allow the sale of ‘low noise’ pyrotechnics.

Those who are firework-adverse may want to consider going to more provinces and territories where fireworks are banned, such as Neuquén, Mendoza, Tierra del Fuego, Bahía Blanca, San Carlos de Bariloche and San Martín de los Andes for a quieter Christmas.

It is important for visitors to know that in Buenos Aires there is little to no public transportation between the hours of 9 p.m. until at least 3 a.m. although this problem has improved with the availability of ride share services in recent years.

Those who need to get to a destination by bus should leave early. There won’t be many taxis on the street.

Ride sharing service such as Uber are better, but it’s best to travel outside peak hours or risk getting stranded.

It is good idea to stay off the roads during the party hours anyway — drunk driving is still a big problem in Argentina on holidays, and there are few police patrolling the streets on Christmas.

Private Christmas Eve parties in Buenos Aires stretch until at least 3 a.m. on Christmas Eve, even in the most conservative of homes.

Bars and clubs start to open at around 2-3 a.m. on Christmas Day for Christmas Eve after-parties, and most young people head out to party all night.

On Christmas Day some are nursing hangovers or suffering sleep deprivation.

The day after Christmas eve resembles New Year’s Day in other countries, with family and friends going around to visit each other while recovering from the night before.

If you love the loud ‘4th of July-style’ Christmas in Argentina, you can look forward to an almost identical celebration a week later, on New Year’s Eve.

The Day of Kings on January 6 marks the official end of the Christmas season in Argentina.