Argentina was isolated from other Spanish speaking countries in its early history. 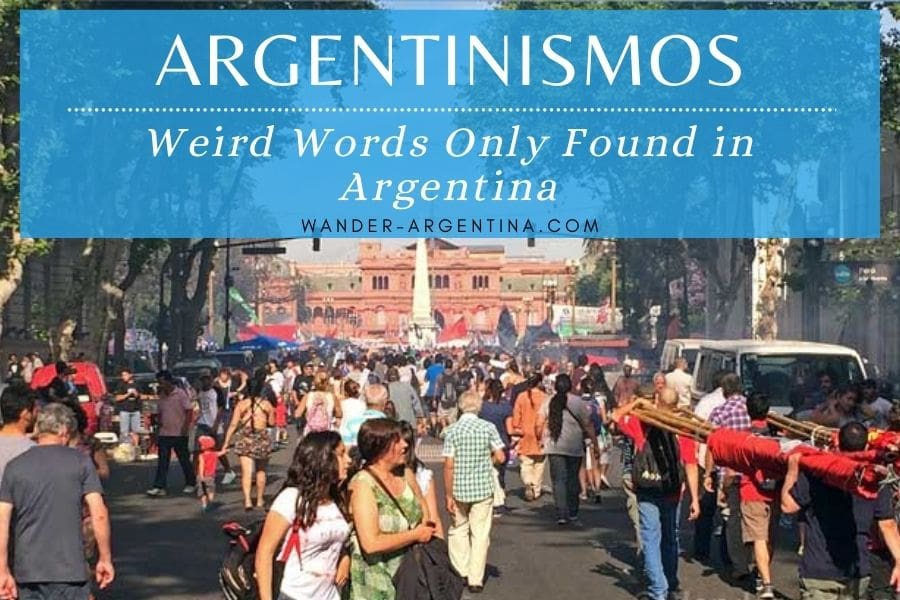 This resulted in there being some vocabulary that is unique to the country (that even native Spanish speakers may not know).

Read on to learn about some of the words that are unique to Argentina.

The most Argentine word in existence is che, a filler word that was adapted from indigenous Mapuche language, and has since become widely used across the country.

It’s commonly used to call someone’s attention, express surprise or emphasize a statement and it oddly seems to resonate with the English word ‘hey!’

Although used to a lesser extent in some neighboring countries, this term has become closely associated with Argentina as a result of its use by Ernesto ‘Che’ Guevara, who said the word so much on his travels that others began to refer to him as ‘Che.’

In its normal application, to address someone with the word ‘che’ is gender neutral.

Other vocabulary words one may hear for the first time in Argentina include ‘piscina’ for ‘pool,’ ‘departmento’ for apartment, ‘vereda’ for sidewalk, ‘bondi’ or ‘colectivo’ for bus and ‘computadora’ for computer.

Something heard in everyday language is the use of ‘re’ not only in its normal use as a prefix to verbs but in place of ‘muy’ (very) as in an Argentinean-ized phrase such as, “(Vos) hablás re bien el Castellano.”

Thanks to Argentina’s unique politics which sometimes harkens back to the caudillos, and other times resembles the political turbulence of Italy.

Gorila and facho are terms that gets thrown around a lot toward those who support ex-President Macri or more right-leaning parties.

Their opposite is a ‘zurdo/a‘ — someone who is far to the left and usually supports the policies of ex-Presidents Nestór Kirchner and former President and current vice President Cristina Kirchner.

‘Trosko’ may also be used to refer to those politically on the left, in reference to the Marxist movement of Leon Trotsky.

Lower-class leftists who show up to protests because they are paid and famously given a choripan sausage sandwich for participating are called choripaneros by the Anti-Peronists ‘gorilas.’

‘Mendes’ is the name most Argentines use to refer to the ‘unmentionable’ ex-President Carlos Menem, whose privatization policies and $AR1-US$1 currency policies are frequently blamed for the 2001 economic crisis that brought the country to its knees.

When it comes to dining in Argentina, you can pretty much leave your Spanish dictionary at home — it won’t help much.

Essential vocabulary words in a traveler’s repertoire include the words medialuna (sweet croissant) and empanada (savory turn-over) and every time you see the word factura (a general term for pastries that also means ‘receipt’ in English) you’ll be tempted to wander in that direction.

Similarly the most Argentine of all sweets is dulce de leche, a sweet milk paste that is eaten on bread, incorporated into pastry recipes or used to fill alfajores, a beloved shortbread cookie usually found by the check-out in virtually any convenience store.

➡ Check out our guide to Argentine desserts to learn more about Argentina’s sweets.

Along with these delicacies, there are some basic food items that have different names from regular Spanish.

One is butter. It appears in Spanish dictionaries as manteca, but is called mantequilla in Argentina (and don’t foget the double ‘ll’ is a ‘sh’ sound!)

When buying fruits and vegetables make sure you ask for frutillas instead of fresas for strawberries.

Avocados are called paltas instead of aguacates, as in the rest of Latin America.

Additionally when drinking some birras (beers) at a bar, make sure you ask for maní instead of cacahuate to get some more peanuts at your table.

If looking for a draft beer ask for a ‘cerveza tirada‘ — but only in Argentina.

In other countries they’ll think you want your beer thrown on the floor.

Some of the culinary specialties unique to Argentina include puchero, a vegetables and meat stew that can include garbanzo beans and is perfect for a cold night.

Another not-to-miss dish is locro, a thick corn soup that is often eaten on patriotic holidays. You can try these dishes at Cumaná in Recoleta or La Carreteria in San Telmo while visiting Buenos Aires.

➡ Read about Argentina’s most traditional and patriotic dishes

See our post ‘Culinary Quirks and Customs of Argentina‘ to learn all about the special foods eaten at certain times of day or on special holidays.

➡ If you wonder why the waiter is slow or what a ‘cubierto’ charge is in a restaurant, read: FAQ: Dining in Argentina

Among the pre-Colombian food found in the Northwestern regions are two dishes that are rather similar:

The main difference between the two is that a tamale is made with masa harina (nixtamailzed corn flour) and is sometimes filled with meat in the center.

Humita is a corn cakes is made from corn meal and usually filled with cheese.