Argentina has several different currency exchange rates, which can be confusing for visitors. 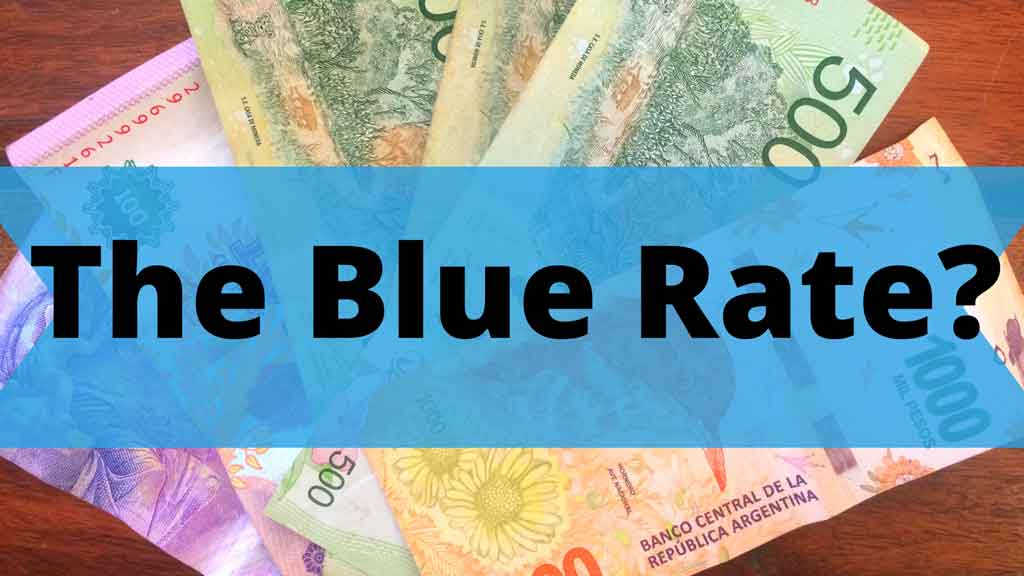 If you’re wondering what the ‘Blue Dollar’ is and why it even exists, read this post and check our currency converter below to save yourself a lot of money while visiting Argentina.

Argentina enjoyed an abundant beginning to the 19th century and was one of the world’s richest countries only one hundred years ago.

The French coined the phrase, ‘rich as an Argentine’ after seeing their lavish spending habits in Europe during the The Belle Époque.

Argentina still has a wealth of natural resources and fertile land.

The riches of yore are most evident in the capital, Buenos Aires.

There are beautifully landscaped parks and plazas, buildings decked out in marble and brass, and elegant public statues such as the the Nereids Fountain all over.

The previous wealth of Argentina is most evident in some of the city’s biggest tourist attractions such as Avenida de Mayo’s Tortoni Cafe and Recoleta Cemetery, where departed Argentines forever rest in the luxury of pricey mausoleums.

Since the golden days, a chaotic political landscape, a succession of military takeovers, corruption and free-for-all privatization in the 80s and 90s wreaked havoc on the economy.

The stark downward economic development in Argentina in is referred to by economists as the ‘Argentine Paradox.’

How did a resource rich country that had a similar GDP to Canada one hundred years ago fall so far?

It’s no mystery for those who live in Argentina (the unorthodox economic model for one thing!) nonetheless, countless essays have been written on the topic.

The Argentine Paradox is often contrasted with the Japanese Paradox. As far as Argentina has fallen, Japan has risen. Japan experienced such economic growth that it grew to become the third largest economy in the world in the same time frame, despite a scarcity of natural resources.

Previous to the economic collapse at the turn of the millennium, Argentina was a more expensive destination than Europe.

Argentina’s devastating 2001 economic crisis and resulted in the devaluation of the peso and lost savings for citizens who kept their money in the bank.

The country’s economic situation stabilized somewhat for citizens the decade after the turn-of-the-21st century crisis.

Employment increased and poverty rates fell for a number of years, but Argentina is on a constant roller coaster ride and the future is always uncertain.

But in a good turn for the economy, visitors looking to stretch their travel dollars flocked to Argentina and tourism grew into the country’s largest service sector industry.

Argentina’s tourism industry has grown in the last 20 years, as travelers discovered they could get more mileage for their moolah.

With destinations such as elegant Buenos Aires and the Alpine town of Bariloche, some liken it to visiting Europe on a South American budget.

During the years of 2007-2012 Argentina was popular with travelers who came to enjoy six dollar steak and Malbec dinners.

Prices inched upward during the few years the currency market was normalized, until 2019, when the government reinstated its ‘creative’ currency controls.

Paradoxically, this means Argentina is once again an extremely affordable destination for travelers, digital nomads and so-called ‘expats.’

* this post has been updated : In 2022 using the Blue Dollar is now normal operating procedure.

For several years, under the government of Cristina Kirchner, Argentina had strict currency restrictions in place, which created a huge black market for dollars.

One of Mauricio Macri’s first moves after winning the presidency in late 2015 was to regularize the flow of currency so that the black market for currency was largely diminished.

Things get confusing for those with old guidebooks because, while the currency situation was normalized for several years, now due to rampant capital flight and dwindling foreign exchange reserves currency controls were reinstated in September, 2019.

Then, the black market ramped up when even tighter currency controls were put in place December 2019, when the Peronist government took power again.

In Buenos Aires and around the country, the official bank exchange rate is once again significantly lower than the black market rate.

Travelers will find they can get a more pesos per dollar by exchanging cash on the black market, or by using an electronic money transfer service.

Today, the black market (or so-called ‘blue dollar’) for foreign currency is once again so strong that by completely avoiding using ATMS or credit cards travelers will double their money by using the Blue Rate.

For an idea of how fast the real value of pesos is falling on the international markets, in January 2020 the Blue Dollar spread was hovering around 25%.

So, the spread between the official rate and the black market rate is large, and usually hovers around 45-55%.

The Blue or Black market dollar is listed in local newspapers as the ‘dólar informal‘ (informal dollar) while the ‘dólar oficial‘ (official dollar) is the bank rate.

Cash is king in Argentina, so visitors will want to concentrate on the ‘dolar informal‘ or blue dollar rate.

In Argentina, both the official and bank market rates change daily, so check the currency converter below to see the official rate before planning your trip.

To see the ‘Blue Dollar’ rate and other categories of conversion, check our currency converter below, updated hourly.

Try our currency converter to compare Argentina’s official rate, the blue dollar rate and the Western Union rate all in one place.

Input the amount of dollars you want to exchange and press return to see the real live rate:

With Argentina’s renewed ‘creative’ currency controls, the situation is that travelers can save lots of money if they come to Argentina with U.S. dollars in cash, or even by using a money transfer service to send money from a bank account at home.

Outside of Buenos Aires it may be more difficult to find money transfer services, especially in small towns, so it pays to carry some USD that you can exchange with an arbolito as a backup.

Travelers may find they can even get more pesos in exchange for their US dollars in more remote areas of the country because people in the provinces have a harder time finding dollars to purchase.

On the other hand, it can sometimes be difficult to find a place to quickly change money in a pinch while traveling around the country, so plan accordingly before travel.

Carrying USD or Euros to exchange for pesos is also a good way to avoid, not just a bad exchange rate, but also steep ATM fees, which run about a minimum of US$8 per withdrawal in Argentina, for any amount.

Travelers are legally permitted to enter Argentina with US$10,000 without declaring it.

→ To read about exchanging money on the street in the Buenos Aires black market, read Black Market Money Exchange & Other Hustles on Florida Street

→ To read about transferring money from your home bank account if you don’t have cash, read Money Transfers to Argentina