Carnival does not just happen in Brazil’s Rio de Janeiro or Argentina’s Gualeguaychú. 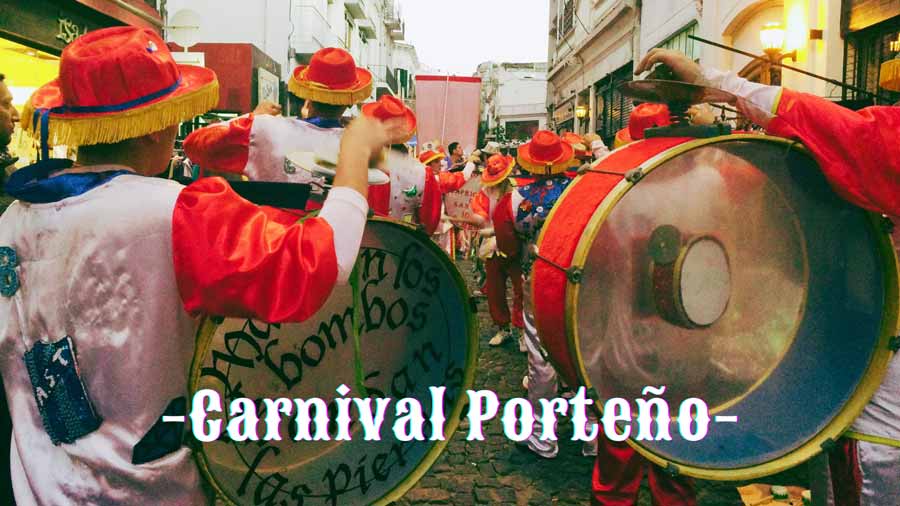 For anyone who’s missed the boat — or bus — to the bigger carnivals, or can’t be torn away from the city’s hustle, Carnaval Porteño (Buenos Aires’ Carnival) is back and better than ever.

Normally, the free festivities take place on Saturdays and Sundays all through February, as well as on Carnival holidays.

This year, 2022 Carnival holidays fall on February 28th & March 1, but the city still hasn’t confirmed if they will permit the big finale on Avenida de Mayo on the Carnval holidays.

→ Going to Brazil instead? Book tickets to the Samba Parade at Carnival in Rio de Janeiro

Dozens of barrios (neighborhoods) in the city have their own celebrations, with over 100 murgas (bands of marching percussionists and dancers) taking to the streets.

What’s different about Buenos Aires’ carnival is that it isn’t one long parade.

The action happens within the confines of 35 gated-off street sections around the city.

This has the benefit of dispersing the crowds so no one is stuck way out straining their neck to see who’s banging which drum.

The celebrations may be less grandiose than other South American carnivals, but the party spirit is by no means lacking.

Each Buenos Aires’ murga carries an often silly or self-deprecating name that includes its home barrio, such as:

‘Los Audaces of Bajo Belgrano‘ (The Audacious of Lower Belgrano);

and one of the city’s largest murgas, ‘Los Amantes de La Boca‘ (The Lovers of La Boca).

What is a Carnival Murga?

A murga is characterized by the bombo con platillo, a special type of drum with a cymbal, originally brought to Argentina by Spanish immigrants.

A pumping beat provides backing for murgueros (participants in the murga) who sing, dance and wave flags with a festive mix of artistic and political expression.

As if the drums aren’t enough to burst all eardrums in the vicinity, deafening chants are bellowed above the hubbub.

Content ranges from group introductions to political messages called críticas — only the finest-tuned Argentine Spanish ears are able to tell the difference.

The best murgas preserve the tradition of the ‘critica’ which are provocative political messages that question those in power.

With an approach to brightness and color similar to a two-year old let loose on the paints, brilliantly decorated faces grin at the crowds.

Costumes, consisting of a suit, gloves, top hat and cane, are lovingly embroidered for months before carnival season by a host of murguero mothers.

At the show, the shiny, sparkling results swish along so fast it’s hard to see where one sequined hat ends and the other begins.

A sea of onlookers get down to the beat, feet tapping with impeccable Latin timing whilst gaggles of small children spray each other, and everyone else in range, with canned foam.

Giggling adolescents join in, using their aerosols to flirt with school friends.

History of Carnival in Buenos Aires

The Argentine carnival tradition grew at the end of the 18th century when a mix of immigrants used dance and song as a way to express disenchantment with their social situation.

The subsequent murgas that sprang from this ‘breaking of the chains’ typically involved the working classes and were used as a way to laugh at those in power — the attire worn in Carnaval Porteño, with the top hat and suit get-up, originated from free slaves poking fun at their previous masters.

Freed African slaves and their descendants would have a separate murga from Italians or Galicians.

This changed in the 1930s when murgas began to form by neighborhoods rather than nationalities or religion and became a unifying force among he more modest classes.

These days, murgas — still highly politically charged — are a way for communities to come together to express themselves.

Each group has its own name and costume linked to its barrio (many murgas are connected to the government, while others choose to be independent).

Groups can be found practicing in their barrio’s main squares during the year and neighbors often come along for some light entertainment and some heavy drumming.

“Last year there were some pregnant girls in our group, so this year they’ve brought their five or six-month old babies.

Our oldest member is 40. Everyone dances together, we don’t discriminate, after all we all travel to the murgas on the same bus.”

Carnaval murgas in Buenos AIres haven’t always been as inclusive.

In the past women weren’t allowed to dance with men, and were not permitted to wear the same clothes.

During the military dictatorship of 1976 -1983 it looked as if the carnival spirit was about to be stamped out forever.

The traditional two-day holiday was annulled and although murgas weren’t expressly forbidden, it was almost impossible for them to continue.

They were only allowed to take place in closed areas, and people had to pay to enter.

“They stole the feeling of murgas by making profit out of them,” says Arcangelo, of the murgas during the dictatorship.

A return to democracy brought about a carnival revival. Workshops and courses were introduced to teach people how to be murgueros.

This helped to expand the murga tradition and include those who previously weren’t involved, such as women and the middle classes.

Bringing this style of music to the masses worked — in 1997 murgas were given ‘Cultural Heritage’ status by the City of Buenos Aires.

Today, a million and a half people in Buenos Aires take to the streets to enjoy the festivities.

Ex-president Cristina Kirchner (now vice president)— who was never one to turn down an excuse for a holiday — reinstated the two-day carnival holiday nationwide in 2011, making the end of Carnival a four-day long weekend.

It’s safe to say that the spirit of carnival is working its way back into the mainstream and while the drum and crowd-averse may disagree, carnival-lovers feel this acceptance is yet more cause for celebration.

“Although there are bad things in the world, the murga shows that you always have to keep going, keep fighting, express yourself and tell the world that you want change,” says murguero Arcangelo.

So grab the face paints, get those feet tapping and take to the streets to join in the fun.