Sitting at the edge of Plaza de Mayo, the Casa Rosada is one of the most iconic buildings in Buenos Aires. 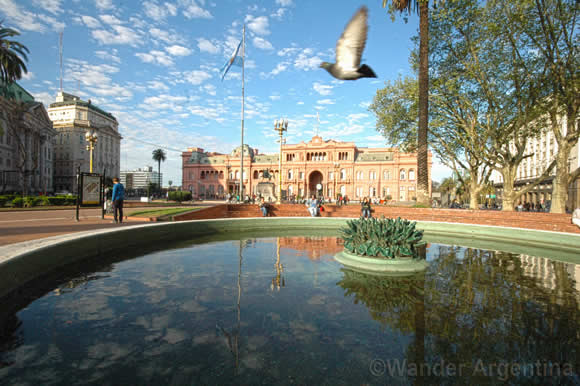 With its pink façade and palace-like design, the governmental house has served as the backdrop to countless numbers of protests, famous speeches and significant moments in Argentina’s history.

Free Tours of the Casa Rosada

Guarded by police and tall gates often flanked with protest signs, the Pink House appears to be an impenetrable castle.

But every weekend, the mysterious palace doors open to the public for free hour-long tours.

The entrance for the tour is at the northern backside of the building, facing Plaza de Mayo.

Once you fly past the lax security and metal detector, make sure to take a photo with the guards of honor, and perhaps try to get them to crack a smile, before getting in line for a ticket.

The Casa Rosada tour is on a first-come, first-served basis and you need the colored ticket to be placed in a tour group.

The tours are available in Spanish, English and Portuguese, although unless you are with a large group of foreigners and request a language preference beforehand, it will most likely be in Spanish. Your tour guide will probably be bilingual and can fill you in on the side though.

A stroll through the Casa Rosada offers visitors a peek into Argentina’s turbulent history and the wealth of the nation.

Highlights of the Casa Rosada Tour

Visitors first get a glimpse of the Bicentennial Hall of Argentina Painters and Paintings, inaugurated in 2011.

From there it’s onto the rest of the palace including the Salón Blanco (White Room), where many important presidential ceremonies take place, the Martín Fierro Hall, more luxurious halls and stairs of Honor, and the beautiful stained-glass gallery.

The Bicentennial Hall for Argentine Women is flanked by photos of famous women of Argentine history and is where in 2012 the Eva Perón 100-peso bill was introduced with much fanfare.

Visitors also get a peak into the President’s office, the presidential elevator with its theater-like red velvet bench and the office where Eva Perón gathered her fervor before heading out to the balcony to address the descamisados (‘shirtless ones’).

Toward the end of the tour, visitors pass over the Patio of Honor, or the Patio of the Palms, which looks as if it came out of a 19th century Spanish film.

If you linger too long in any room, marveling at sparkling chandeliers or turn of the 19th century furniture, a guard or security officer will shoo you along to catch up with the group.

The presidential balcony is the highlight of the tour for many, as it’s a chance to take the stage where former presidents have given historic speeches, get a bird’s eye view of Plaza de Mayo and get a great picture to take home.

Nearby, check out the Cafe Tortoní, a historic French style café ➡

* Editor’s Update: Until the last change of administration in Argentina, guests could make free reservations through https://visitas.casarosada.gob.ar/ but the website isn’t working.

In the meantime, check out some other popular Buenos Aires tours.

• When operating (up in the air due to the pandemic) 10:00 a.m. until 6:00p.m., Saturdays (in Spanish) They begin every 10 to 15 minutes and last about an hour, they are now required to be booked online via the link above

• English tours are on Saturdays at 12:30 p.m. The website says you must book 15 days in advance and sometimes is full. If this is the case, you can just try to show up at the right time and you may get lucky. Make sure you have your passport.
• Cost: Free!
• Cameras are permitted on the tour, but no flash
• ID may be requested for security reasons

→  For even more Argentine history, visit the Casa Rosada Museum (formerly the Bicentenary Museum), on the south side of the first floor.

It offers over 200 years of governmental mementos, a look at the city’s underground tunnels and fort on top of which the Casa Rosada was constructed as well as permanent and temporary art exhibits.

This full-service tour can be personalized to see the Buenos Aires’ highlights such as the La Boca, the Plaza de Mayo, San Telmo and Recoleta, including the Recoleta Cemetery, depending on your preference.