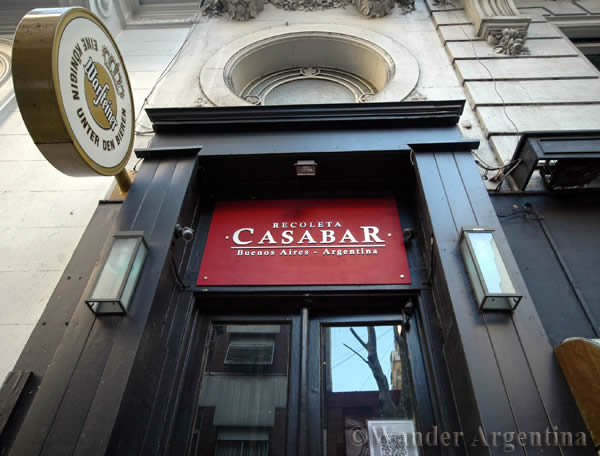 Casabar in Recoleta lives up to its name, proving to be a home away from home for many foreigners and locals alike.

To start with, the bar is actually located in an old French-style house. That’s old in the sense of classic, not rundown. More than two years of restoration work by the owners ensured there is nothing rundown about the place. The three-story mansion has retained (or regained) its charm, both inside and out, but contains all the trappings of a modern cocktail bar. High ceilings, ornate mirrors and subtly colored lighting ensure an elegant Buenos Aires feel.

Expats who visit have several reasons to forget their homesickness. A glittering selection of beers and spirits on show means that whether you’re from Belgium, Australia, the Czech Republic, or dozens of other countries, you have your own liquid representation at Casabar.

On the menu, are fine gourmet pizzas, empanadas and an Argentine-style picada(meat and cheese platter), but otherwise it’s pretty standard North American bar fare – which is actually quite hard to find down in these parts. The standout has to be the buffalo wings, which are some of the best in South America (try them and try to dispute that fact).

On major holidays such as Thanksgiving and Christmas, Casabar usually puts on a special menu for those wandering souls who suddenly realize they are far from home and family. Prices for both food and drinks are towards the higher end of the scale, but keep an eye out for different happy hour specials each night that help keep things affordable.

The other connection to home for many will be the three big flat screen TVs, showing all the major sporting events from the US and all over the world. With NFL, MLB, NHL, NBA, as well as big fights from boxing and UFC, you have a lot of the sporting alphabet covered. Don’t be alarmed if you’re not a sports nut though, as most nights the games are just a background distraction rather than the focus of attention – the obvious exception being big events such as the Superbowl.

There is a good mix of tourists and locals at this Recoleta spot.  Interestingly the Argentines tend to sit together with friends at the tables and sip slowly on Fernet and Cokes, while the foreigners flutter around the bar area, knocking back pints with a few cheap shots thrown in (the alcoholic ones, not petty insults).

The best chance to mingle seems to be the smoking patio, which means that those non-smokers who want to meet an attractive Recoleta type have to either take up the habit or make up some lame excuse to hang out in the smoking area, something like, “I just felt like sitting under the stars for a while. Even though I can’t see them because of the canvas roof, I still know they’re up there.”

While the majority of patrons are younger, older customers can often be seen enjoying a meal or a game on the big screens. It’s also not a bad spot for couples on a date, perhaps as a place to stop for a few drinks after dinner, and there happen to be some good restaurants right on the same block, such as Cumaná across the street. 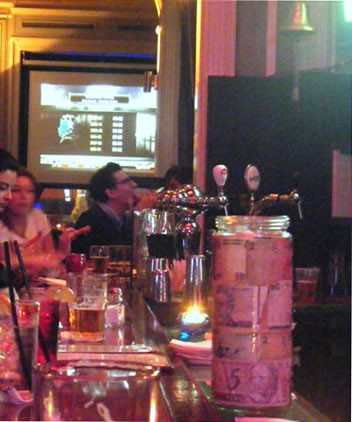 Casabar is noticeably more sophisticated than other nearby ‘foreigner bars’ such as El Alamo and Shamrock, proving that expats who enjoy a drink and a night out can sometimes look pretty classy when doing so.