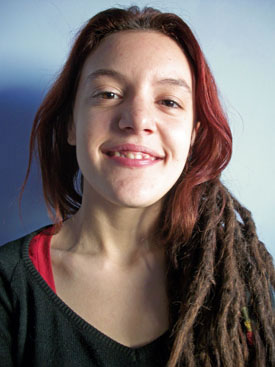 Some private schools are more practical but many of them aren’t very good; a lot of people basically purchase their diplomas.

I play drums. I’m studying African drumming and I’m a member of the neighborhood Candombe group of La Boca.

I love drumming it’s like its own language, especially when you hit it just right and get in the groove – sometimes you can say things with the drum that you wouldn’t say out loud.

The thing about La Boca is that the neighborhood begins when the tourists go home, at around 6 p.m. or so.

The Caminito – those are the tenements that are fixed up, but if you walk a few blocks away, they’re definitely not like that.

The tourists go to El Caminito, an Proa Museum, which are good, but most people just see those two blocks and that’s it. But there is so much in La Boca — we have festivals, music clinics, a community garden, soup kitchens — there’s a lot going on.

Yeah, there’s a lot of teamwork between neighbors. There was recently a fire in one of the buildings in the neighborhood. Usually the government just gives the family a subsidy and they have to move, but we were able to raise enough money so that they could stay.

• Where do you live in La Boca?

I live in a tenement too, with my boyfriend. My parents are in the same building as well, as some other people. We were renting and the owner died, so it’s ours now and it’s a great place. We just have to pay the taxes on the house for 15 years to take over ownership of the property.

It seems like a lot of them pay for a tour where they come on a bus and eat and see a dance show, but they really don’t see the neighborhood.

There should be a better tourist agency that shows off some of the real culture of the neighborhood. (Editor’s note: since this interview we started offering low-key, authentic tours in La Boca.)

Bahia, Brazil. There’s a lot of samba music there. I would like to go there and play drums, but I’ve never been there, so who knows if I would really like it. I’ll have to go there and see.