There are more ways to meet other foreigners in Buenos Aires than attending tango classes or sitting around in an expat bar until someone talks to you. 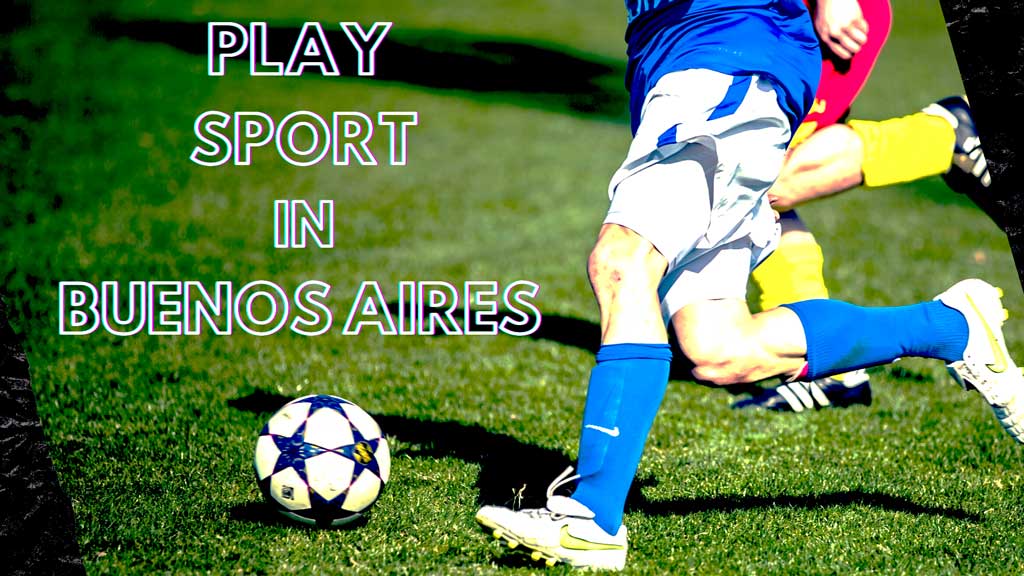 Joining a sporting team while in the city ensures you have a whole bunch of insta friends to play sport with, eat pizza, and drink beer after the game.

If you’re going to play sport in Argentina, it might as well be the national pastime of choice:  Soccer.

And if soccer is your game, you will be spoiled for choice because the options are endless.

Visitors can simply organize a game and rent a field in the nearest club.

This group is made up of the oddest assortment of characters since the Cantina scene in Star Wars – a real hodge podge of nationalities and skill levels.

That means that everyone from first timers, to full-scale internationals (well, experienced players at least) are invited to come along and have a kick around.

They play games throughout the week, often in San Telmo, and on the weekends in Palermo.

See a Boca Juniors Game! Check out the list of upcoming games ->

Tennis is one of the most popular sports in Buenos Aires, so their are courts throughout the city.

Often their are postings on local social media sites looking for a partner or opponent.

Tennis players can join a local sports club, or simple rent a court by the hour. Serious players may want to bring their own rackets though, because the cost of imported sport equipment is high here.

The Olivos Golf Club has five clay courts that are open to amateurs and professionals.

The Club de Gimnasio y Escrima (Gymnastics and Fencing) has a system of 31 courts in Buenos Aires, two with lighting in Palermo.

The YMCA at Av. Lafuente 2480 has quite a few clay courts.

Since 1921 the Belgrano Athletic Club has hosted the Championship of Tennis for the City of Buenos Aires, where the premier players compete.

They also have a tennis school. Find out more on the Belgrano Athletic Club website.

Cricket is one of the oldest sports in Buenos Aires, another British import. Cricket in Argentina goes back to the British Invasion of the River Plate, with the first recorded game taking place in 1806 in San Antonio de Areco.

Although cricket is now a minority sport in here, it wasn’t always this way.

The Buenos Aires Cricket Club used to be based in Palermo’s Parque Tres de Febrero, but due to urbanization had to relocate to the northern suburb of San Fernando.

The sport club is but commonly referred to as ‘Buenos Aires,’ making it a bit confusing for foreigners, but they offer a range of other sports mentioned here.

Rugby is another game that was brought to Argentina by the British toward the end of the 19th century, with the first official game taking place at the Buenos Aires Cricket Club en 1873.

There are quite a lot of amateur players especially in northern neighborhoods such as Palermo or Belgrano.

Many private high schools here and north of the city have rugby clubs that draw the more brawny students.

Rugby players, like American football players, share the reputation as the most meatheaded of the jock world — hang around in the bard of Palermo long enough and you’ll be able to spot them.

There is also women’s rugby and the Club Ciudad De Buenos Aires in Nuñez has hosted women’s rugby tournaments. Also in Nuñez is the Campo Municipal De Deportes N 9, right by the river.

The public facility where touch Rugby games take place, but you may be required to go with a resident of the area.

Americans and Canadians who miss playing American football, might have to settle for the other pigskin sport, most loved by Ozzies, Kiwis, South Africans and Brits.

Games can be found asking at clubs or other players.

Sometimes group of foreigners organize a casual tag rugby game on the weekends.

The Buenos Aires Rugby and Cricket Club (BARAC) in the northern suburbs near the Jockey Club is a good place to start — their website is down, so search for them on social media.

The Argentine Unión of Rugby has a professional team called the Pumas.

More serious player will want to check out the Unión Argentina de Rugby .

Bahia Blanca, home to ex NBA pro, Manu Ginóbili is the epicenter of basketball in the country.

Nevertheless it isn’t hard to find a pickup game in Buenos Aires.

Also downtown, the YMCA has a court, as does their sede Parque, which is out near the limit of the city in Bajo Flores.

The nice thing about the YMCA is they have locations in various parts of greater Buenos Aires, not just the wealthy neighborhoods where many country clubs are located.

The public Club Ciudad de Buenos Aires in Nuñez is another good option. They have basketball and cover pretty much all the sports, including hockey and volleyball.

Golf is an individual sport of course, but still a great way to meet people on the fairway or hanging around a club.

Argentina has more golf courses than any country in Latin America.

There are some lovely private clubs with lots of facilities and clubhouses.

There are also some amazing public fairways, such as the City of Buenos Aires public golf course which has 18 holes right in the heart of the city.

Polo is one of the world’s most elite non-motorized sports — those fine polo ponies are incredibly expensive to purchase, keep and maintain. Not to mention those huge, manicured polo fields.

Polo is so associated with the aristocracy that most plebeians just haven’t had contact with it.

But Argentina is a polo mecca.

Amazingly, in Buenos Aires there are estancias where visitors can get lessons and try to play polo themselves. It makes for a unique experience that can’t be found anywhere else. Get in touch with us to sign up for a polo day.

Baseball is traditionally one of the hardest to find sports in Buenos Aires.

In the past there were never too many baseball-playing immigrants but when Argentina became famously inexpensive during the previous parallel currency days, Americans descended upon the nation.

Like every great idea, the Shankees baseball team was conceived over a few pints at a bar, way back in 2008.

‘Shankees’ (or yanquis) are what those from the United States are called in Argentina, (particularly in River Plate region, where the Spanish has a special twist

For years , the Shankees team has been participating in local weekend tournaments such as the Liga Metro de Beisball out near the Ezeiza airport.

Epic victories often followed by a great many celebratory drinks, and tragic defeats were often lamented in the same way.

Unfortunately, after winning a division championship, politics happened and the team disbanded in 2017.

So any besibol players will have to find a local team to play with or form their own new team  — an least you know it can be done. Anyone enthusiastic to do so, may want to contact the Shankee founder.

For whatever sport you’re looking for, social media channels and the networking site, Meetup are a good place to check for activities.

Once in Buenos Aires and meeting people, visiting nomads and those who stick around for a while will discover there are an abundance of Whatsapp Telegram and Discord group chats for different sport activities.

Usually everyone pitches in a nominal amount to pay for the court.

Netball has arrived to Buenos Aires. The team sport is an offshoot of basketball. Seven players on two teams try to score by throwing a ball through a hoop on opposing sides of the court.

The net has no backboard and there is no dribbling or running with the ball.

Instead, the ball is passed within three seconds between teammates in order to try to score.

Pickleball, a sort of mini-tennis with paddles instead of rackets, is also gaining popularity in Buenos Aires. One place to play is the ‘Club de Padel’ (Paddle Club) in the center of the city at Entre Ríos 642.

There’s even a Argentine Pickleball Association, which has tournaments and engages with other Pickleball groups around the world. Last year, the first international Pickleball tournament ook place in Punta del Este, Uruguay.