If you’re on vacation or living in Buenos Aires and feeling the stress of city life, it may be time to treat yourself to a massage but there are a few things you should be aware of when seeking out massage in Buenos Aires. 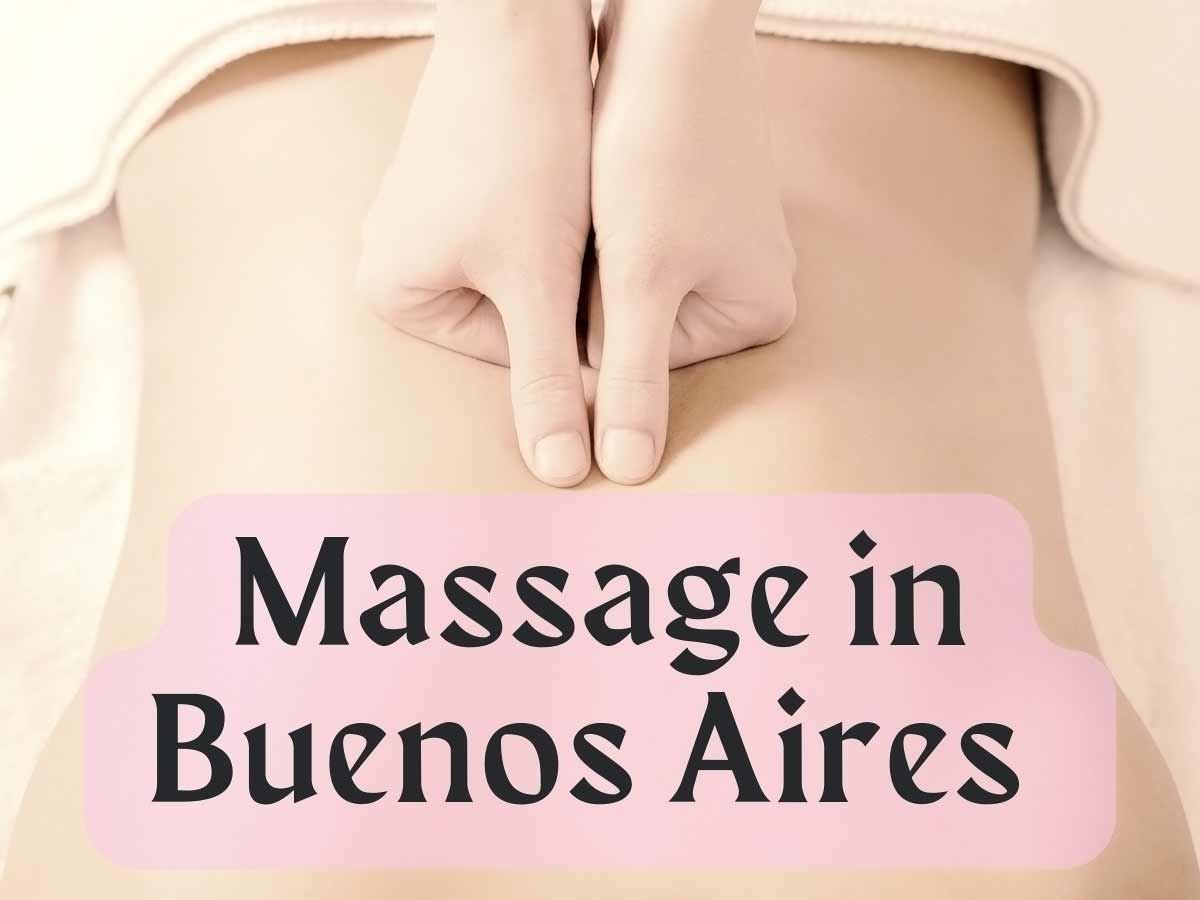 One thing to be aware of is that there is no official licensing requirement for massage in Buenos Aires or anywhere else in Argentina.

This means that anyone can call themselves a ‘massage therapist,’ whether they have training or not, and the vast majority of search results for ‘masaje‘ are actually providing adult services. 😉

When making an appointment for a massage feel free to ask the provider where they studied, for how long and any other questions that might give you an idea of their level of training, or better yet go to someone who comes recommended.

Digital nomads, expats and remote workers will discover there are a handful of professional massage therapists with overseas licensing who come and go through Buenos Aires.

They tend to charge a bit more than local practitioners without the same training.

Look for them in Whatsapps, Telegram groups or via recommendation on Facebook.

As in many places of the world, in Buenos Aires ‘massage’ can be used as a ‘code word’ to indicate sexual services.

This obfuscation is extremely common and those using the word ‘massage’ as a cover for sexual services is more prevalent than legitimate trained massage therapists in Buenos Aires.

A little over ten years ago the Argentine government banned so-called ‘Rubro 59’ ads (sexual service ads that used to appear in the back section of newspapers and magazines).

The legislation was designed by the Justice Minister and the National Women’s Council in an effort to fight human trafficking.

The new law called for the continued monitoring of newspaper ads to make sure they were compliant.

It proved to be too little too late as the brothel and massage parlor industry was moving online anyway (and as a side effect, it took a major source of revenue away from already economically-strapped newspapers.)

Indeed some may say it had the inverse effect to the desired one: it made it harder to suss out legitimate massage therapists or spas because sex workers started calling themselves ‘masseuses’ and spas that provide sexual services operate in the open around the city.

That’s because prostitution is in a legal grey area in Argentina — it’s basically decriminalized. Only pimping is illegal. Calling it ‘massage’ is one way to get around this.

Whoops! — I just Wanted a Massage

Stories also abound in Buenos Aires of expats or visitors who scheduled a massage or wander into a walk-in massage parlor only to find out that they unintentionally booked an appointment for a massage with a ‘happy ending’ (usually referred to as a ‘relax massage’) or even full-on intercourse with a total stranger.

It should also be noted that there are also many foreign men who come to Buenos Aires specifically for this reason.

One forum of foreign mongers in Buenos Aires has listings of women’s ‘massage services’ making it clear that there is much more demand for prostitution than actual massage.

The market wants want the market wants, but this is the reason it’s a challenge to find a good therapeutic massage in Buenos Aires.

Similarly, Buenos Aires’ professional massage therapists all have stories of clients who book an appointment but make it clear when they arrive that they are looking for much more than a therapeutic massage.

What makes it more confusing is that the massage parlors that function as brothels will often offer other esthetic beauty services and even provide an impressive list of the types of massage they specialize in, such as the list below:

Massage parlors that operate as brothels in Buenos Aires even have Google Business Pages, as would any legitimate business.

These businesses are mostly allowed to operate, but in tune with the purpose of banning sexual service ads, there are occasional raids (press release — in Spanish) on some of these establishments, especially if there are many neighbor complaints pertaining to one particular business.

When conducting raids, they work in tandem with the national Rescue Program for Victims of Trafficking and sometimes the prosecutor files charges of human trafficking.

If you look at the reviews of some of these Buenos Aires spas there will be lots of reviews from women about being pampered with their great pedicure or massage.

But mixed in with the normal seeming reviews, there will be ones such as the following that thanks the ‘masseuse’ for helping with his ‘genital malaise.’

The Argentine Association of Professional Massage has fought since 2006, unsuccessfully so far, for legislation that would license or certify massage therapists.

But even the most well-known massage school in Buenos Aires has received complaints about the inability of male teachers to remain professional.

One proposal created by a senator from Formosa reads,

“Aware of the fact that different businesses have emerged using the good name of (massage) therapy to cover up illicit practices… it is essential to regulate the practice of massage and the masseuse profession and establish the requirements to practice said profession, grant them the authority to regulate, investigate, sanction these professionals and penalize the illegal exercise of the practice of therapeutic massages for others purposes.

It should be noted that massage is a legitimate option as a preventive health measure, as such it needs to be regulated throughout the national territory, thus ensuring professionalism and protecting the social interest of people in health matters.

Women who study professional massage in Argentina often feel particularly disappointed that people don’t understand the healing arts, assume they are sex workers and that it opens them up to sexual harassment from clients.

To avoid the the pervasive ‘rub and tug’ massage parlors, visitors looking for a legitimate walk-in therapeutic massage can always go to a five-star hotel spa. Some of the most popular ones in Buenos Aires are:

Spa of Four Seasons Bs As

The price of hotel spa massages might be a little higher than one would pay privately and are also hit and miss in terms of quality of the massage therapist.

The treatment at hotel spas are likely to be of the ‘fluff and buff’ variety.

Without any sort of massage licensing regulations, even at these establishments it’s likely that many spa employees have no training in the skeletal and muscular structure, biology, kinesiology or how muscles work, how to access where they are contracted or how to alleviate pain.

Safe to say massage is not a profession that is taken seriously in Argentina and there is lots of room for fake or ‘creative certifications’ so travelers are advised to make sure they do their due diligence.

If there is a language barrier it shouldn’t be a big deal with a true professional you can always point to problem areas, but here are some massage terms in Spanish for language learners.

I have an old injury here

I have a sore neck

I have a knot in my back here

I have a pulled muscle

I get cramps here

Are you a Massage Therapist in Buenos Aires? List Your Massage Services here

Are you a English-speaking Buenos Aires-based trained and certified massage therapist who would like to give your business a boost by appearing on the first page of Google Search Results?

For this and other inquiries get in touch via our contact form!