La Poesía is a place to toast the writers of Buenos Aires in a bona fide San Telmo literary venue. 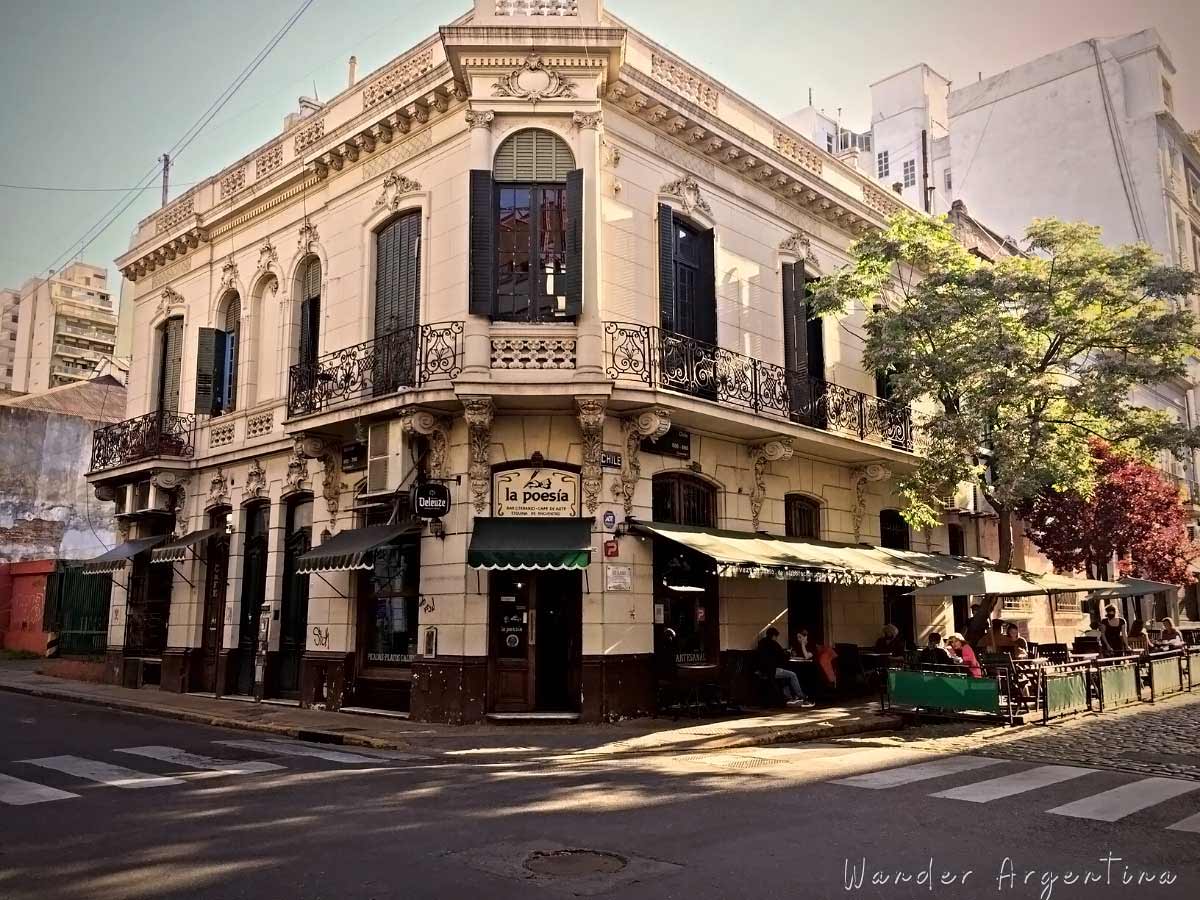 Housed in a turn of the 19th century building, the cafe preserves the traditional tiled floor and dark wood bar.

The shelves are lined with books and artifacts and an upstairs wall is packed with black and white portraits of some of Buenos Aires’ notable artists and literary figures.

Originally founded in 1982 by journalist and poet, Rubén Derlis, La Poesía became a place for the artists and thinkers of Buenos Aires to contemplate democracy after the end of Argentina’s military dictatorship.

Here well-known musicians and writers congregated for discussion and critique and held workshops such as ‘Poesía Lunfarda’ (Lunfardo Poetry).

Do you remember the cafe La Poesía, that magic night in San Telmo?

Buenos Aires devised our meeting, so romantic and sweet, Lulú

The bar closed in 1988 but was never forgotten by the 1960’s-era socialist writers and San Telmo intellectuals who gathered there.

The wooden tables have embedded brass plaques noting the literary heavy weights whom wrote or held court at these tables in the 1980s.

It was here that the Uruguayan poet and lyricist, Horacio Ferrer, mostly known for his work with Astor Piazzolla, met the woman who remains his wife to this day, Lucía Micheli.

The meeting is immortalized in his 1992 song, Lulú.

In the two decades since the closing of the original La Poesía, one failed business after another occupied the locale — it seemed the corner was cursed.

Finally La Poesía was reopened at the end of 2008 by Pablo Durán and Laura Carro, the husband and wife team who run three other successful classic corner bars in the city:

All four of the dynamic duo’s historic bars are categorized as ‘notable cafes’ by the city of Buenos Aires.

→ Read ‘The Allure of the Buenos Aires Cafe‘

The only thing that could use some updating here is the menu — it’s comprehensive but lacking in creativity.

The picadas, (cheese and meat platters are a good bet) — try the Rubén Derlis platter, a selection of the poet’s favorites, along with a pint of the full-bodied handcrafted. beer.

The birra is brewed on the premises.

Ask for ‘rubia’ for blonde beer (lager), or ‘negra‘ for dark beer, ‘rojo’ for red beer.

Since the beer craze hit Argentina they also added ‘IPA,’ which is pronounced phonetically, not by its initials, in case you’ve encountered this confusion).

→ Guide to the Gang-like signs to order coffee in Argentina

From afternoon to night La Poesía is busy with couples sipping the excellent Malbec, writers becoming inspired via osmosis and groups of friends debating in an array of languages.

On the weekends the few tables along the sidewalk allow for good people watching while you sip a cappuccino or beer brewed on-site.

These days, La Poesía hosts many more tourists than it did in the ’80s, but it remains a meeting place for Porteños.

Hang around long enough and you’re liable to spot some of the original La Poesía habitués, such as Horacio Ferrer and Ruben Derlis.

→  Ask us about the Buenos Aires Literary tour, or our cafe tour

• cc accepted, but sometimes not working, take cash just in case & anyway you know about the Blue Dollar right? 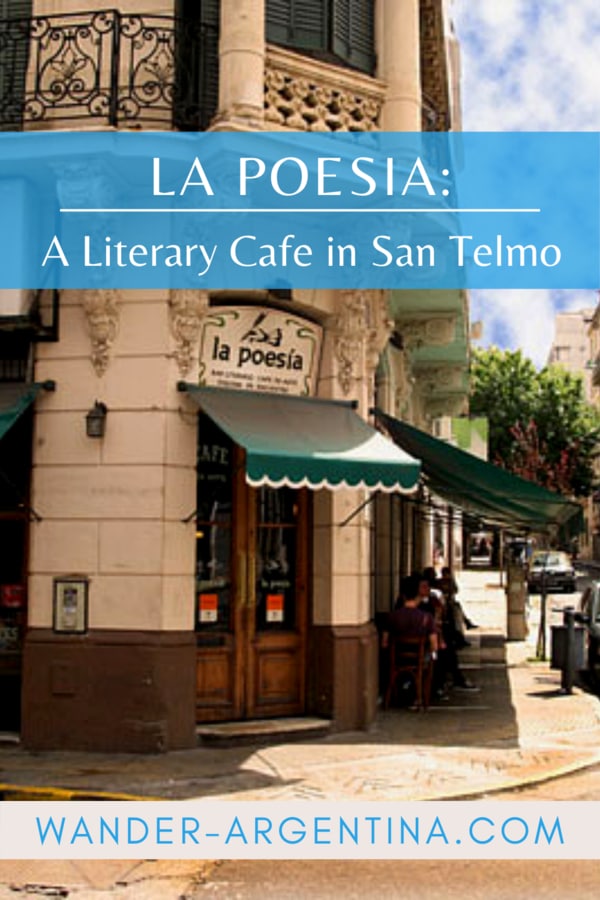 Other cool cafe-bars in San Telmo:

→ Pride Cafe, the only specifically LGBTQ cafe-bar in the neighborhood

→ Bar Britanico, where Ernesto Sabato wrote Heroes and Tombs and part of the Motorcycle Diaries was filmed

→ If it’s early enough, there is a wide variety of small restaurants inside the epicenter of the action, the revamped San Telmo Market.

Here there are many more culinary options including gourmet coffee, excellent empanadas and pizza and a range of international cuisine including Thai, Korean, French (including fondue), Mediterranean, Americana food and others.

→ For beer on tap in an authentic British pub with pretty decent pub food, including fish and chips and curries, try Gibralter Pub.

→ Not in San Telmo, but only about 8 blocks away, Cafe Tortoni, the city’s most famous Parisian-style historic cafe